Why Should You Travel To Georgia?

Georgia is a small country on the furthest outskirts of Europe. An ex-Soviet state, it’s quite poor and doesn’t see many tourists. So why travel to Georgia? Because it’s freaking amazing, that’s why.

The last few weeks in Georgia have been a whirlwind of snowy mountains, cheesy bread, and dangerously hospitable people. We’re already looking forward to coming back!

(Though next time, in summer. We do not handle freezing our asses off well.)

Georgia is a place that any traveler must visit, but I won’t leave you hanging with just a simple recommendation.

So, why travel to Georgia? 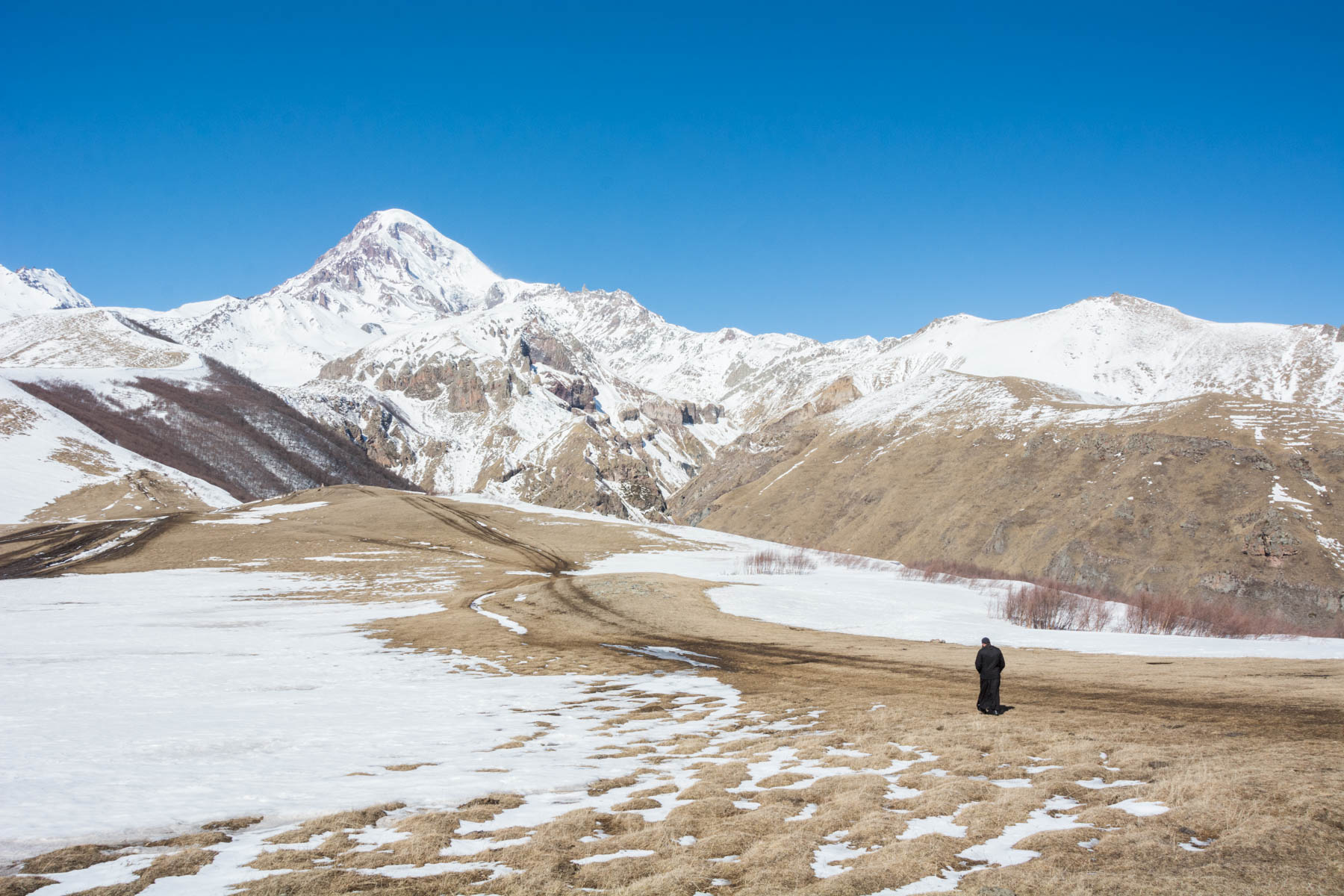 The landscape is insane.

The landscape, to put it simply, is absolutely epic.

When people think of epic landscapes, they instantly think of New Zealand or Iceland. Patagonia or the west coast of the United States.

Newsflash! Most of those places are quite far away from the vast majority of people, and once you’ve gotten over the financial stress of getting there, it’s still expensive to travel there.

Georgia, on the other hand, is close to Europe, Asia, and Africa. It’s also only an Atlantic hop and a bit away from the western hemisphere. It has epic mountains for hiking and/or skiing, mere hours away from warm beaches and rolling hills covered with vineyards.

It’s almost not fair how cheap travel to Georgia is. In the three weeks that we were in Georgia, I took out €300 from my bank account.

Yes, you read that correctly.

With that €300, we had private rooms with bathrooms and mountain views. We could afford all kinds of rock ‘n roll things to do in Tbilisi, Georgia’s capital. We had piles of dee-licious Georgian foodstuffs, and many an alcoholic beverage (a pint of beer is 50 cents!). This also includes loads of hours of transport all up and down the country, and first class train rides, some with wi-fi, some with beds. Check out our Georgian budget report for more info on how much it costs to travel in Georgia. 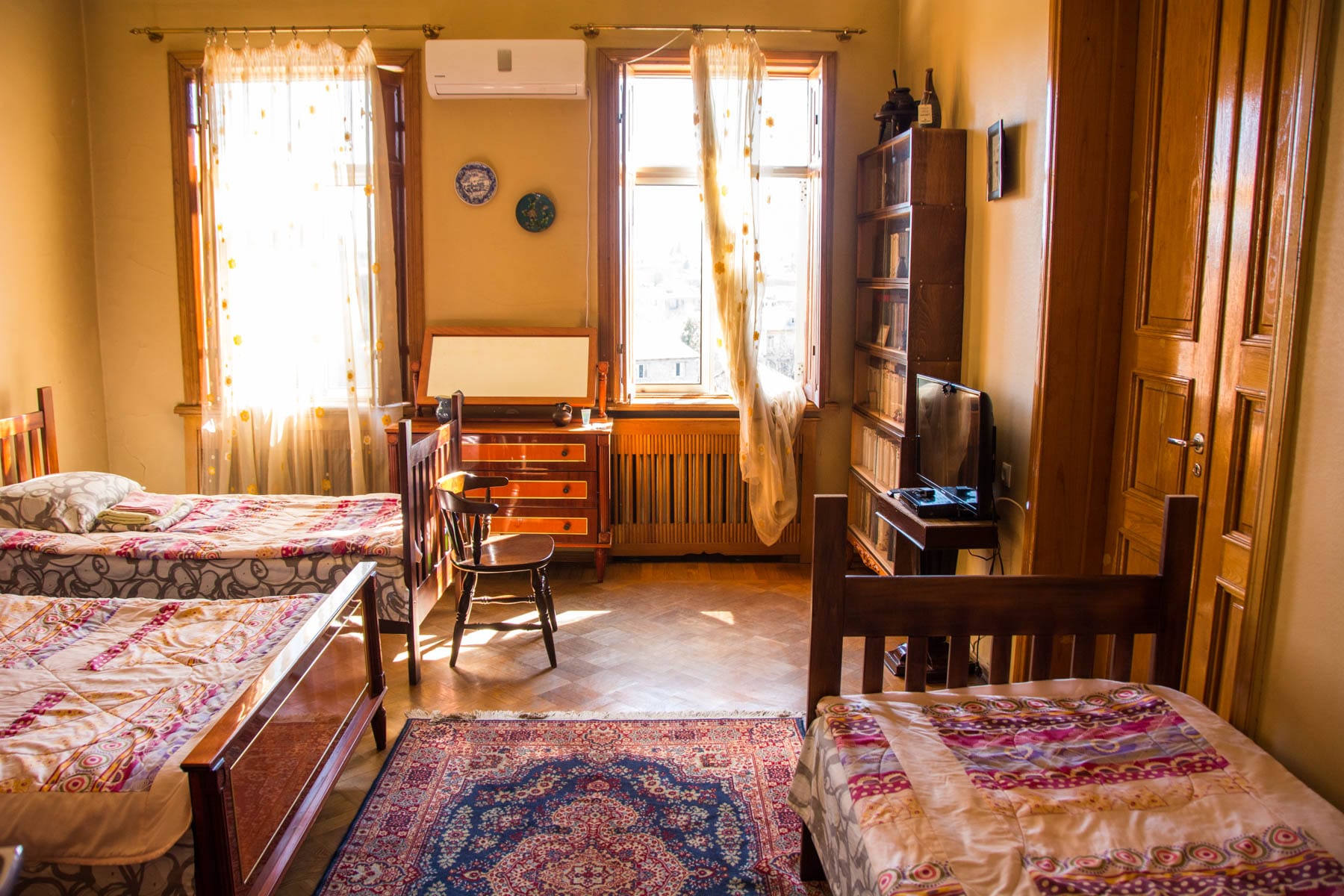 This room at Sun Guesthouse in Kutaisi had 3 double beds, mountain views, and a patio outside where we sat and drank homemade wine with the owner. Oh, and it was €10 a night. Um, yes.

We pondered prices often and realized that travel to Georgia was just as cheap as travel in Southeast Asia. Cheaper if you add in the fact that one meal in Georgia will last you for several hours, as opposed to the 30 minutes a bowl of noodles gets you in Asia.

(That is not to say that noodle soup is bad. Don’t worry baby, I still love you more than anything!)

If you don’t believe me or want to see more info about precisely how much we spent, check out our budget report for backpacking in Georgia.

The country has a rich history

Georgia sits at a convergence point of the East and West. It was an important stop along the Silk Road, and it housed many great civilizations throughout history. Though its past is troubled at times, the meeting and clashing of cultures have resulted in a country rich in influences, from Georgian and Armenian to Turkish to Persian to Russian.

Orthodox churches sit on hilltops minutes away from Roman ruins, and cave cities are decorated with Byzantine-esque frescoes. Foods are richly spiced, despite there not being many spices grown in Georgia, and in places, you can just as easily find a Turkish teahouse or a Russian kitchen as you can a Georgian restaurant. 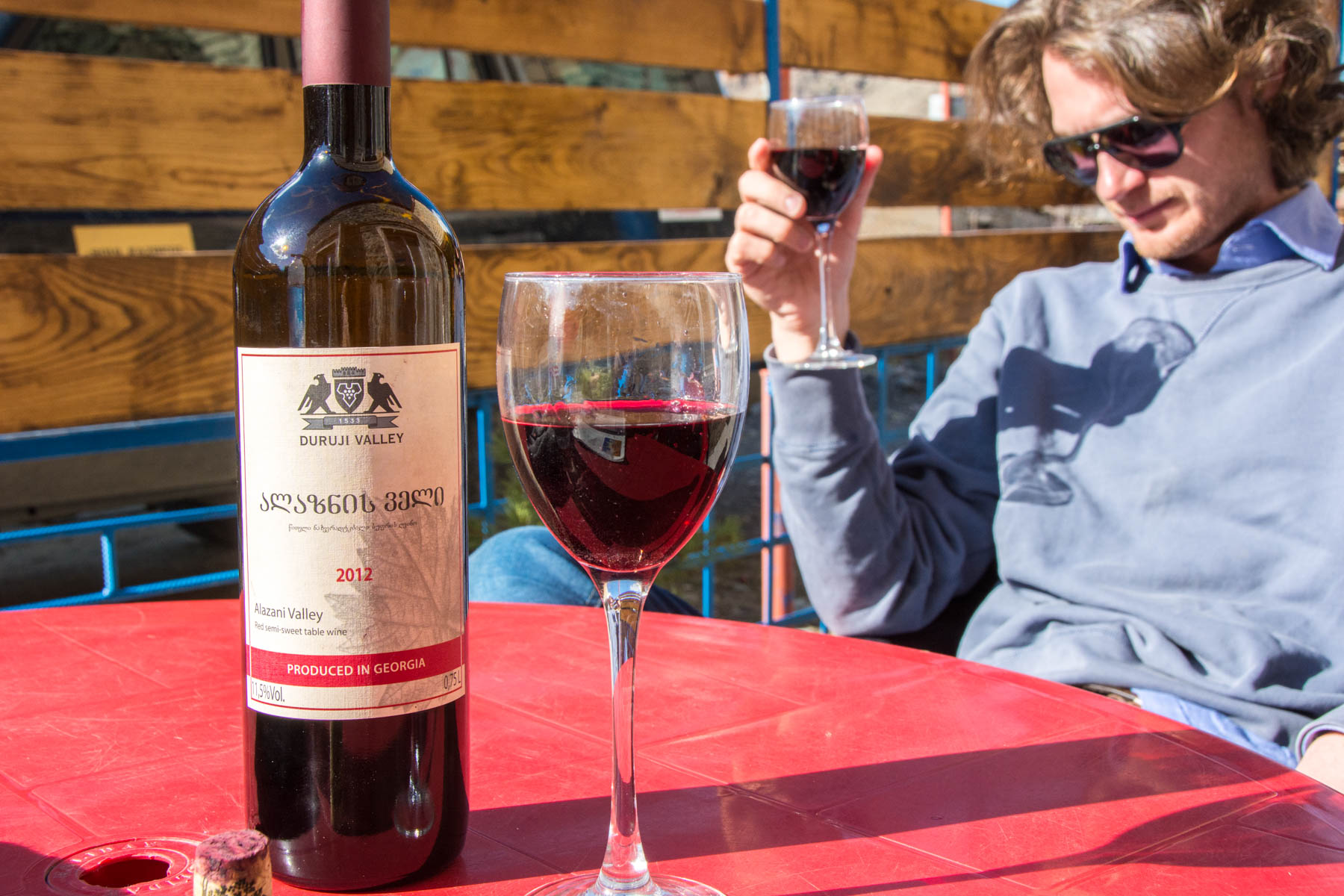 … plus, people claim that wine was invented in Georgia, and it’s still an integral part of their culture. Need I say more? 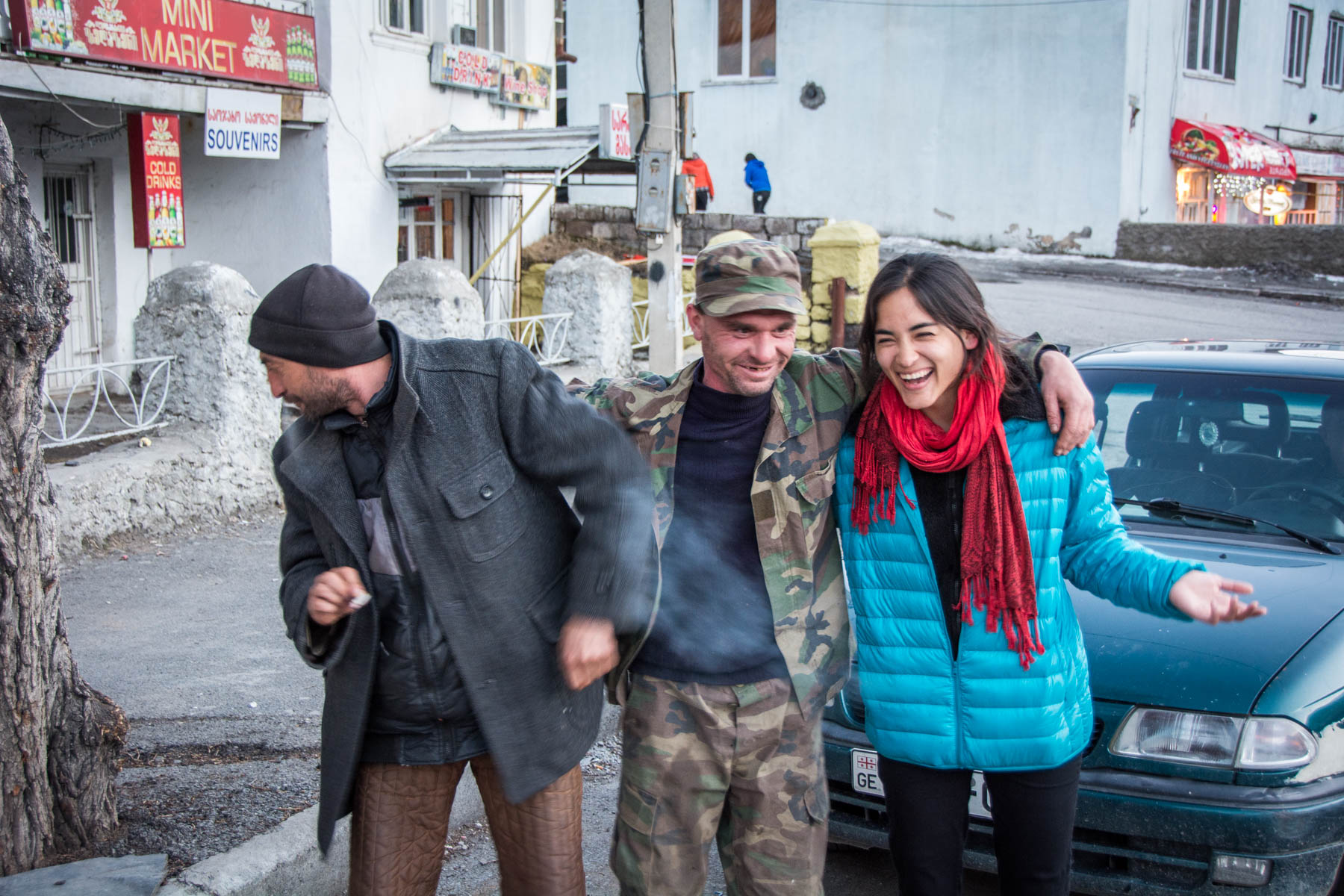 These guys were fatally hospitable… but in the best way possible.

The people are the greatest, and the country is super safe

The people of Georgia are some of the most hospitable people we’ve met in our travels.

It’s hard to explain how–all countries have hospitable people, if you look long enough, and many cultures are naturally welcoming. So, why are the Georgians so great? I’d venture to say that it’s because they’re always willing to take the extra step to help you out or make you feel at home.

A good example is asking for directions. I’d ask people for directions in very (very) broken Russian. Even if they had no idea what I’d said, or weren’t able to respond and have me understand, they’d still take us and walk with us all the way, until we found where we needed to go. Even taxi drivers, who can be notorious for giving false information, or refusing to help unless you pay for a ride, were helpful. Sure, they first say that they’ll drive you there, but when you refuse, they’re just as helpful as any other person on the street.

For more on Georgian hospitality, check out The Boho Chica’s article on traveling in Georgia as an Indian. 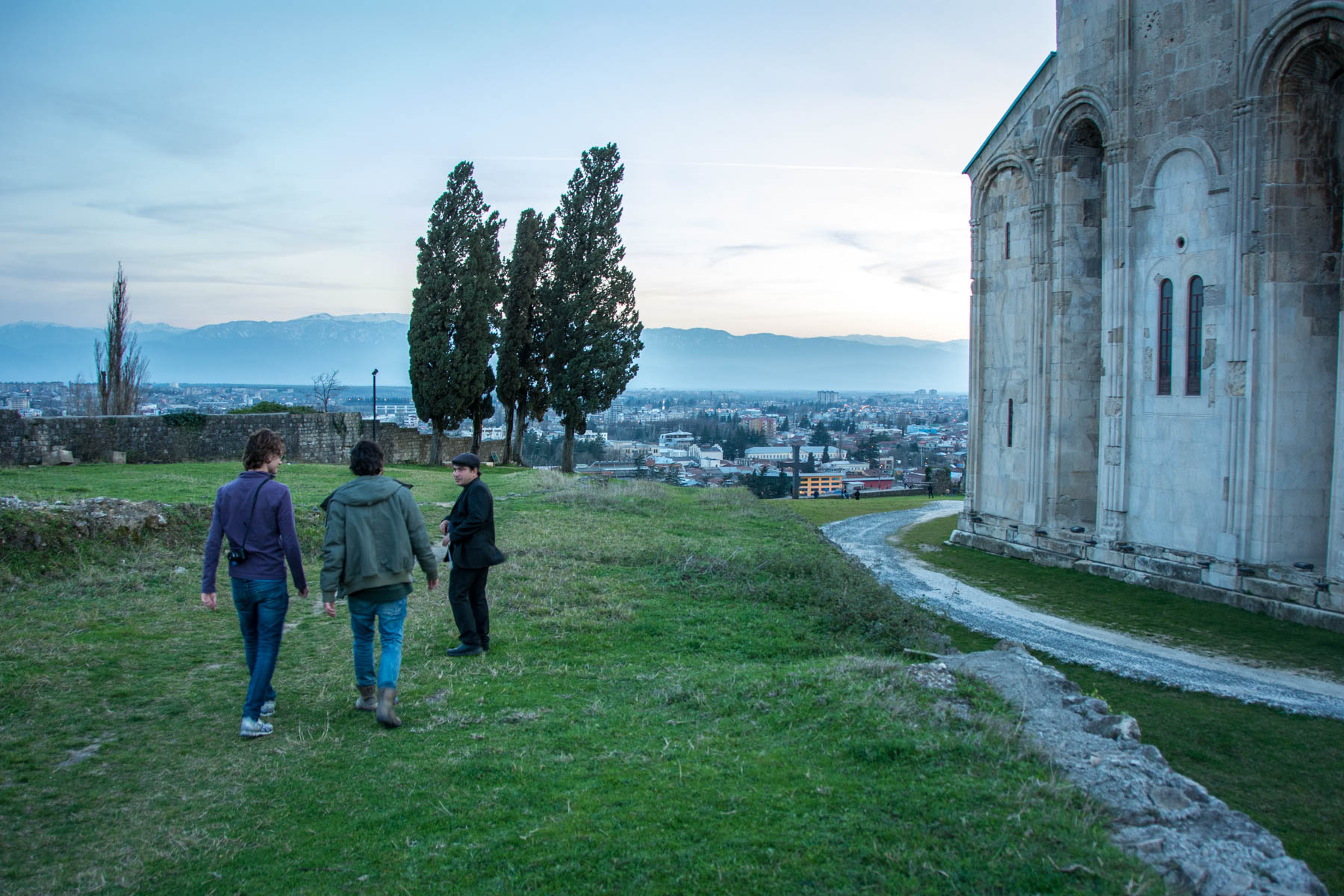 “Sexy” man gave us a tour of the grounds (and of all of the ‘blaspheming’ Georgian kids lurking there) of Bagrati cathedral in Kutaisi for free, despite only knowing about 3 words of English and a bit of broken Russian.

Georgians say that this is because they are all Christian, that they want to help to the best of their abilities, and it would be un-Christian not to.

Note to world: this is what religion is supposed to be like, remember?

Because of this mindset, travel to Georgia is quite safe. You won’t find people trying to steal your things while you look in the other direction. There will be no hands pilfering the contents of your pockets while you’re taking photos, and it was common to see people leave their cars unlocked and unattended, while the keys were still in the ignition. Uh, what? We’d be hard-pressed to come up with other countries where this would be possible. 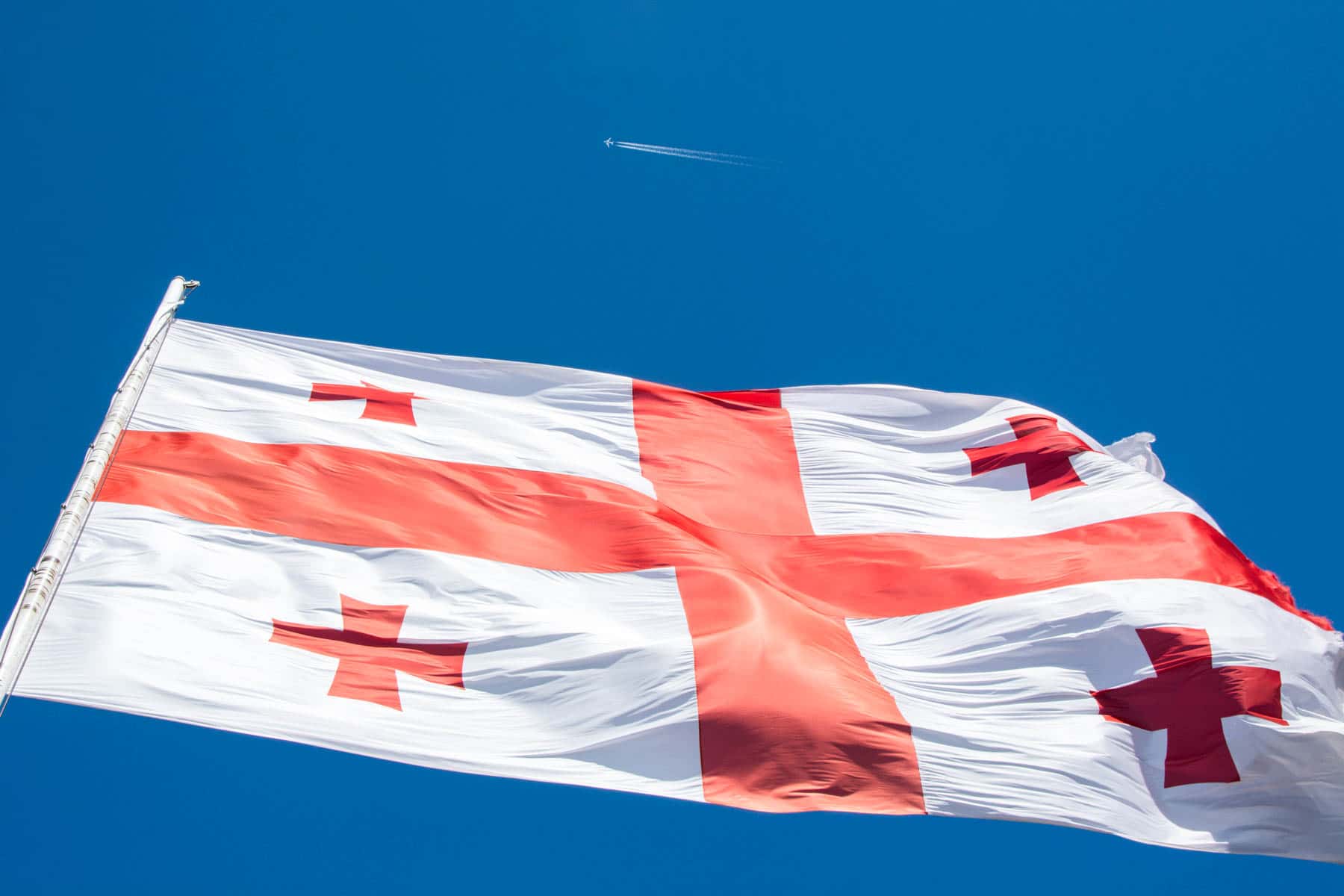 More of this, please.

After being shafted by the Ottomans and Soviets for far too long, Georgia is hurting as a country. They have no real exports, there aren’t enough jobs (people be sitting on the street doing nothing all day errday), and poverty runs rampant. Georgia relies on tourism for much of their economy but often loses out to more popular destinations like Turkey or other countries in Eastern Europe.

Despite that, many cities and regions are making efforts to become more tourist-friendly. There are plenty of signs in English, tourist information offices in each city (that are… usually open), a plethora of guesthouses and cafes, and road signs are all in Georgian and English. Plus, as I already said, the people themselves are the most valuable resource, and much of the younger generation is versed in English.

So, travel to Georgia! Give them some love. They need it, but more importantly, they deserve it. 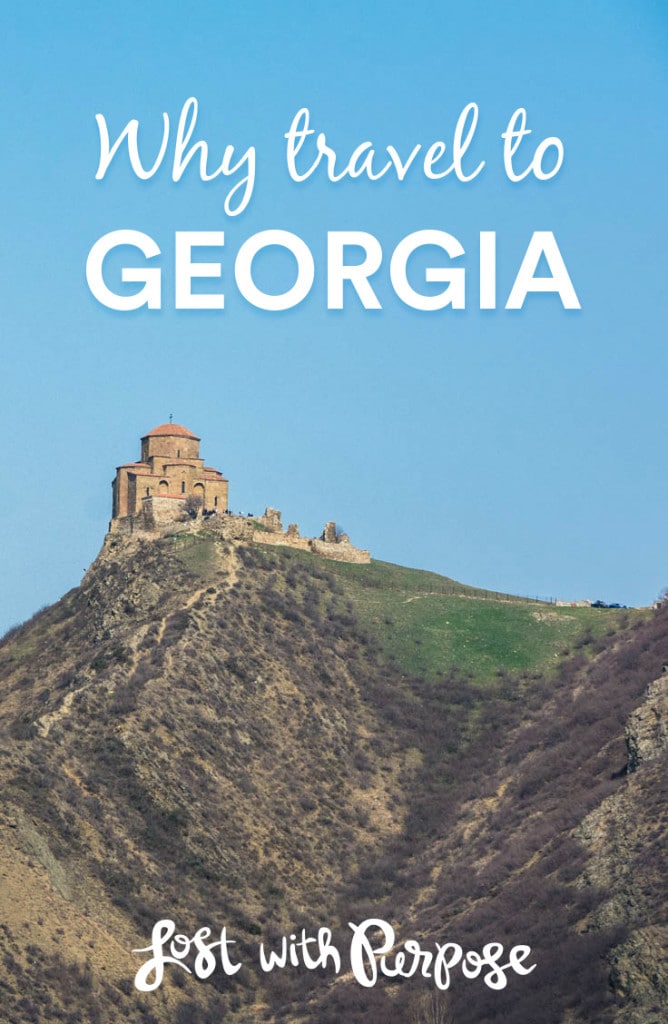