Traveling As An Unmarried Couple In Armenia

Our experiences traveling as an unmarried couple in Armenia. From whether or not it was socially acceptable (it was, mostly), to the reactions we got when people found out we aren’t married… and don’t want children, either!

I was at Haghpat monastery, standing in a warm beam of sunlight shining through the main archway. I was chatting in broken Russian with its caretaker, who had been kind enough to show me around his monastery, when we entered into the subject of my relationship with Sebastiaan.

“Do you have children?”

“What? How long have you been together?”

“I don’t want children. I am too young! I just want to see the world.”

His eyes widen in an expression that’s somewhere between the incredulity of hearing someone say they dislike chocolate (blasphemy), and the horror having to watch a puppy be run over by a lawnmower.

In many parts of Armenia, it is customary for women to be married in their early 20s, and having children–preferably strong sons–is the expected next step. Families are traditionally patriarchal, and very tightly knit. Raising a family is a woman’s job, and a man’s pride.

My further explanation that I am “just” 24 years old only exacerbates things. In his eyes, I’m dangerously close to Spinster Status, a social pariah. My opinion? My age is 24 years of proof that I am not even close to being mature enough to deal with babies, let alone keep one alive for more than 20 minutes. Before leaving to travel, I only just graduated to keeping desert plants alive, for Pete’s sake.

(Plus, said plants were abandoned on the side of the street by a dumpster when I left… something that I hear is not recommended with small children.) 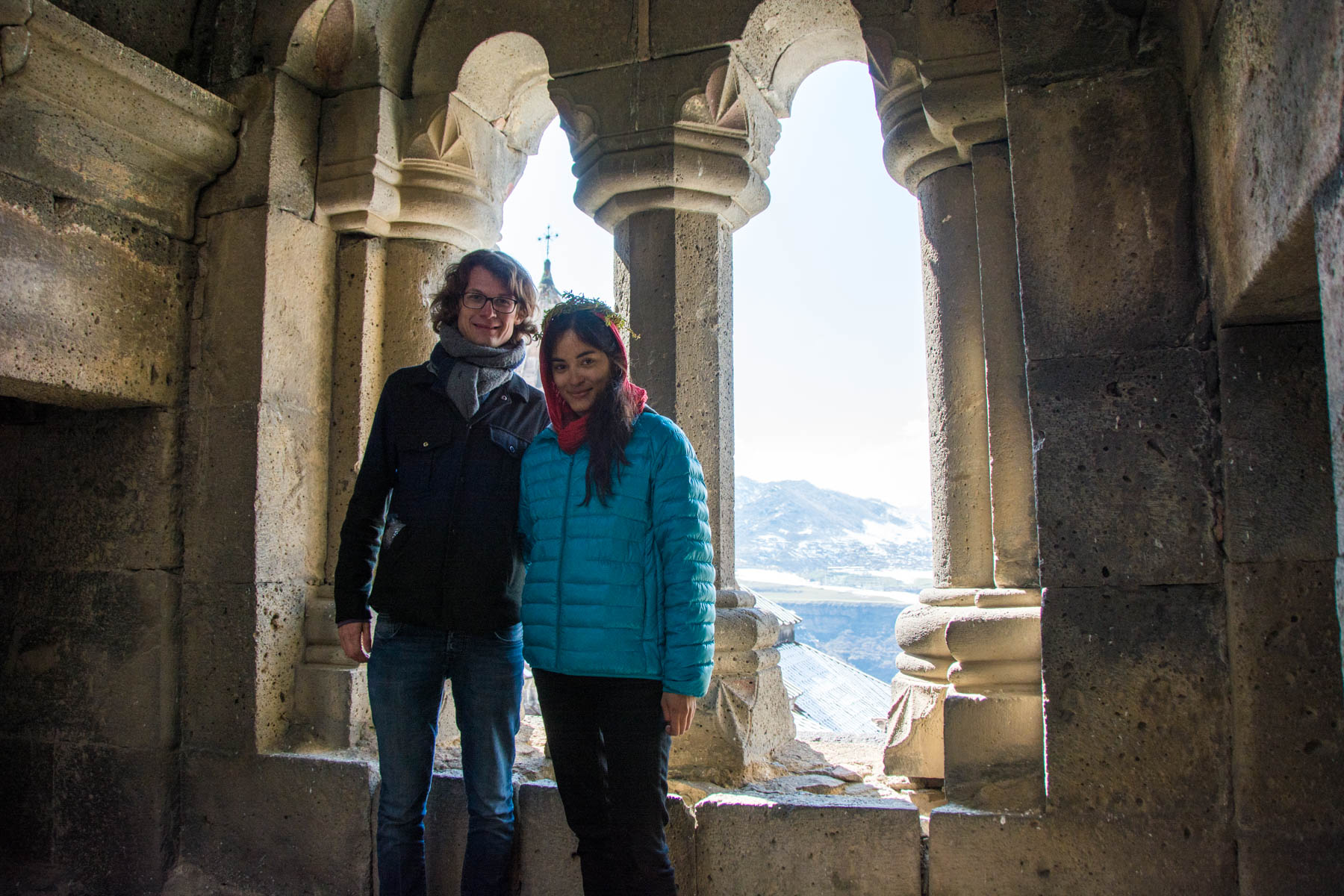 Traveling as an unmarried couple in Armenia

Luckily, these kinds of interactions are the extent of what you’ll have to deal with when traveling as an unmarried couple in Armenia. Despite the country’s conservative Christian values, it’s completely acceptable to book hotel and guesthouse rooms for two, sans-wedding ring. People are very understanding of the fact that couples these days travel around together, both pre- and post-hitching.

Some will ask pointedly if you’re married, and may give you That Look when you say no. Some are more casual, understanding that the younger generation gets up to all sorts of hijinks that they’re better off leaving alone. I’ve gotten a stink eye or two from Armenian grandmothers, but that’s okay–my Filipino grandmother used to also tut tut at these kinds of things.

(We just avoided the issue–it took her several years to find out I was living with Sebastiaan in the Netherlands.)

Some responses went deeper. Several days ago, Sebastiaan and I were sitting outside of a man’s house in Yeghegnadzor, a city in southern Armenia. Upon detecting that we were foreign, he had called us over, and we sat on stone benches beside his house, amongst budding apple trees and a flock of curious chickens. He had his wife serve us homemade juice, jam, fruit vodka, bread, and fruit as we discussed everything from the freshness of the air, to our desire to see the world, to his barbecues with his Canadian neighbor. 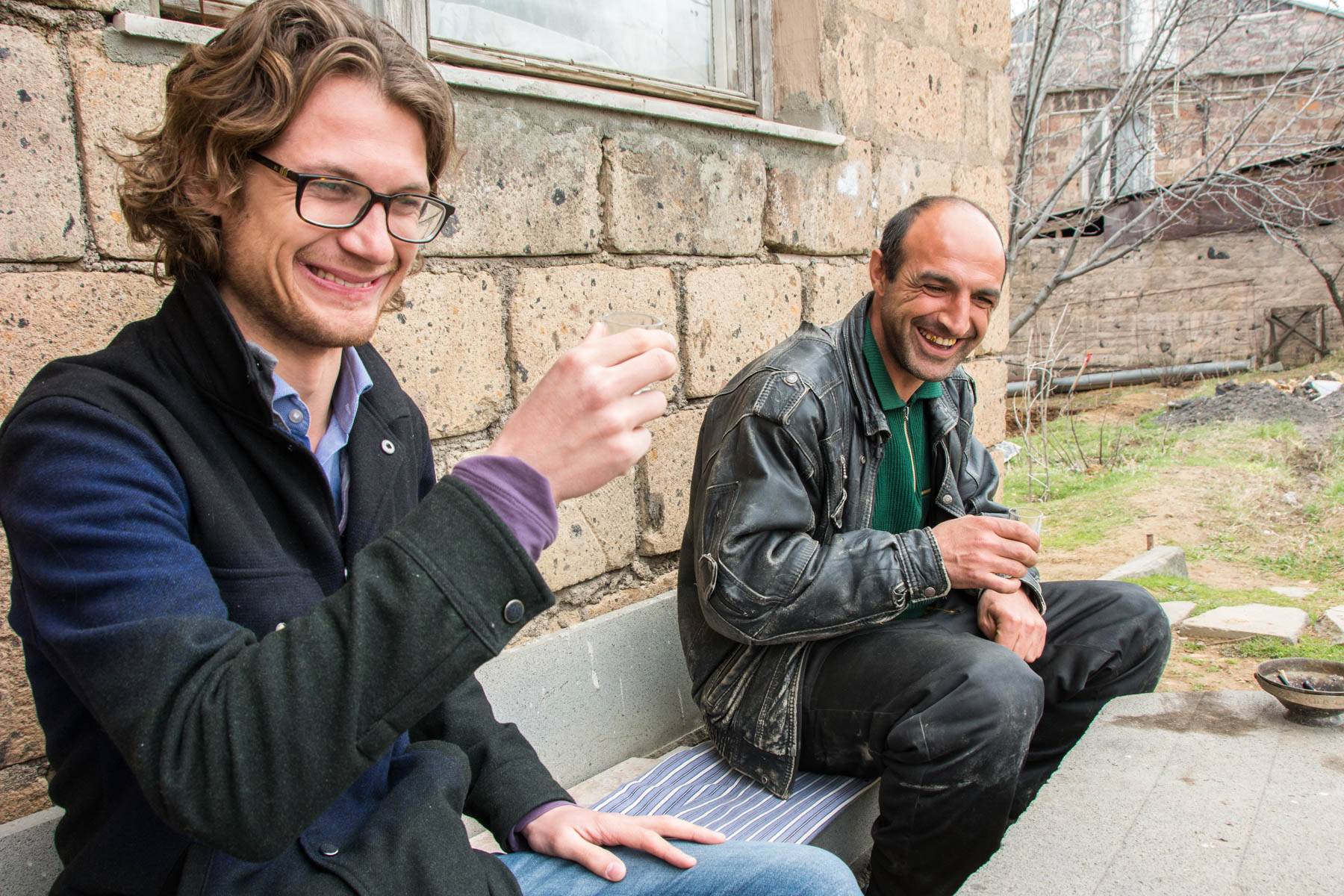 Trying out the homemade oghee, fruit vodka. Sebastiaan is smiling, but I assure you, he’s crying on the inside. We’ve cut ties with dear Lady Liquor after our near-death experience with drinking in Georgia.

Eventually, of course, the conversation turned to children. He asked if we had children, and I said no. He looked questioningly at Sebastiaan, and asked why not.

“Tell him I don’t want children, that I want to see the world,” Sebastiaan promptly responded.

I relayed the message in my rudimentary Russian. The man rubbed his head thoughtfully.

“I don’t understand,” he said slowly.

“Why do you want to travel the world, to see people living like this? Living such poor lives? You want to travel and see things like this, when instead you could be having sons, making a family? Having children, it is a miracle!” He raised his hands to the skies above, as though asking for God to confirm his point.

I shook my head. Childbirth may be an incredible feat of nature, but getting a chance to look into lives like his–where the farthest food has to travel is from the tree outside to the kitchen, where the mountain air is sweet and fresh every day, and where neighbors wouldn’t hesitate to invite each other into their homes for food and drink, despite never having met before–that is a miracle to me.

Besides… I still need to master the art keeping plants alive. 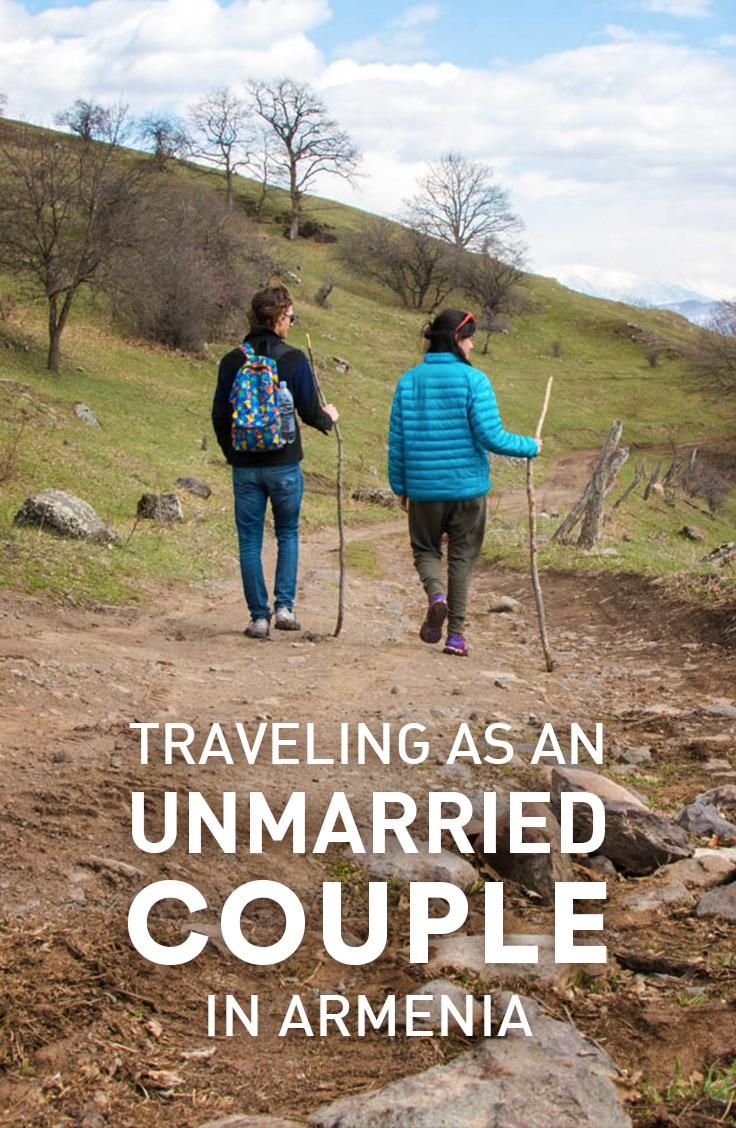 Have you traveled with a significant other through countries where it could be considered strange? Where did you go? How did people react?