The train between Dorud and Andimeshk, Iran is hands-down one of the most beautiful train rides we’ve ever experienced and a must-see for travelers in Iran. Here’s how to get aboard.

The train ride between Dorud and Andimeshk is one of the most beautiful we’ve ever taken. The train passes through rocky canyons and river valleys, periodically stopping at tiny villages of literally 10 buildings or less. If you’re in western Iran and you have time, definitely don’t miss it. It was one of the highlights of our travels in Iran and must be one of the most scenic train journeys in the world. 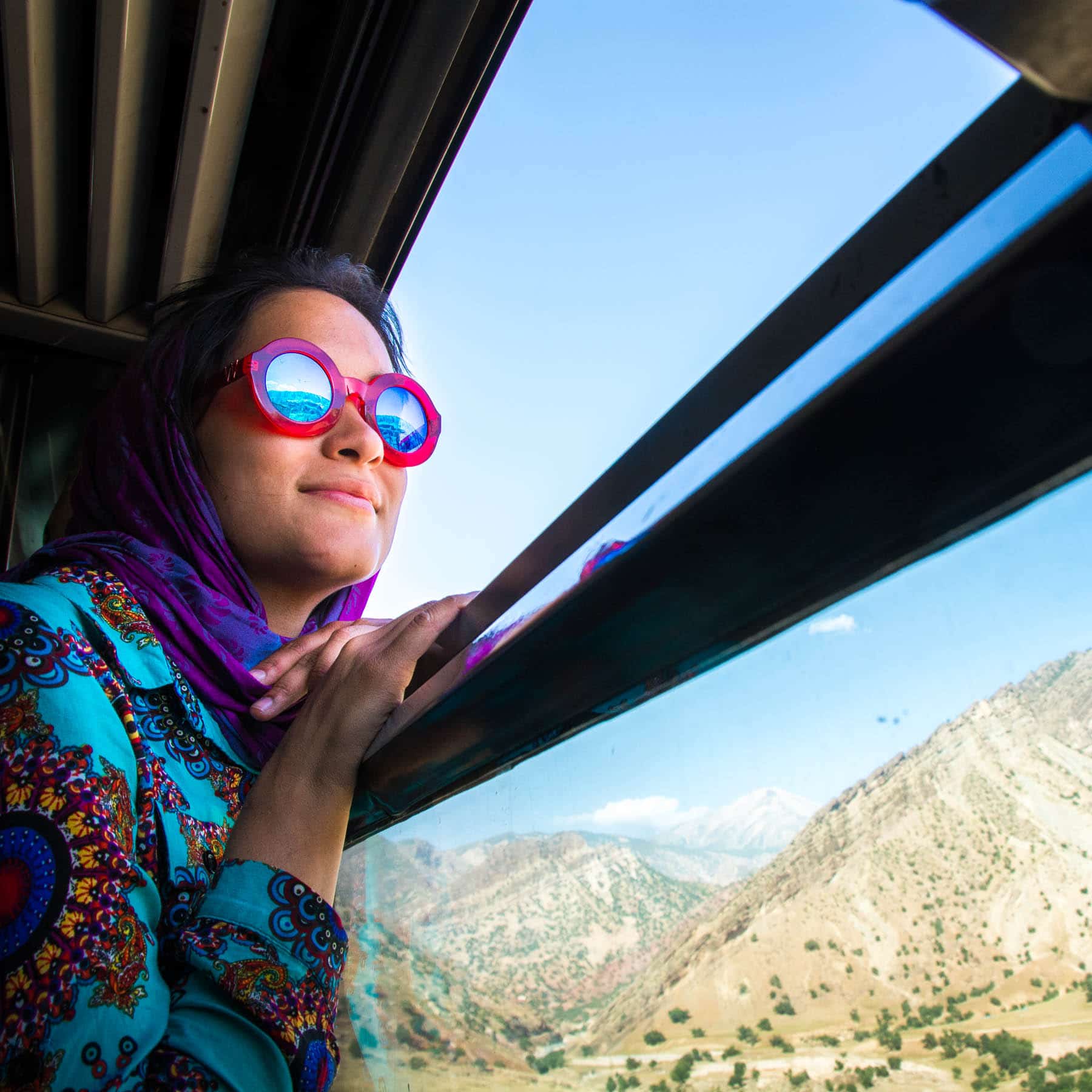 Alex enjoying the ride while the wind blows through her hair (… erm, hijab).

Taking the train between Dorud and Andimeshk 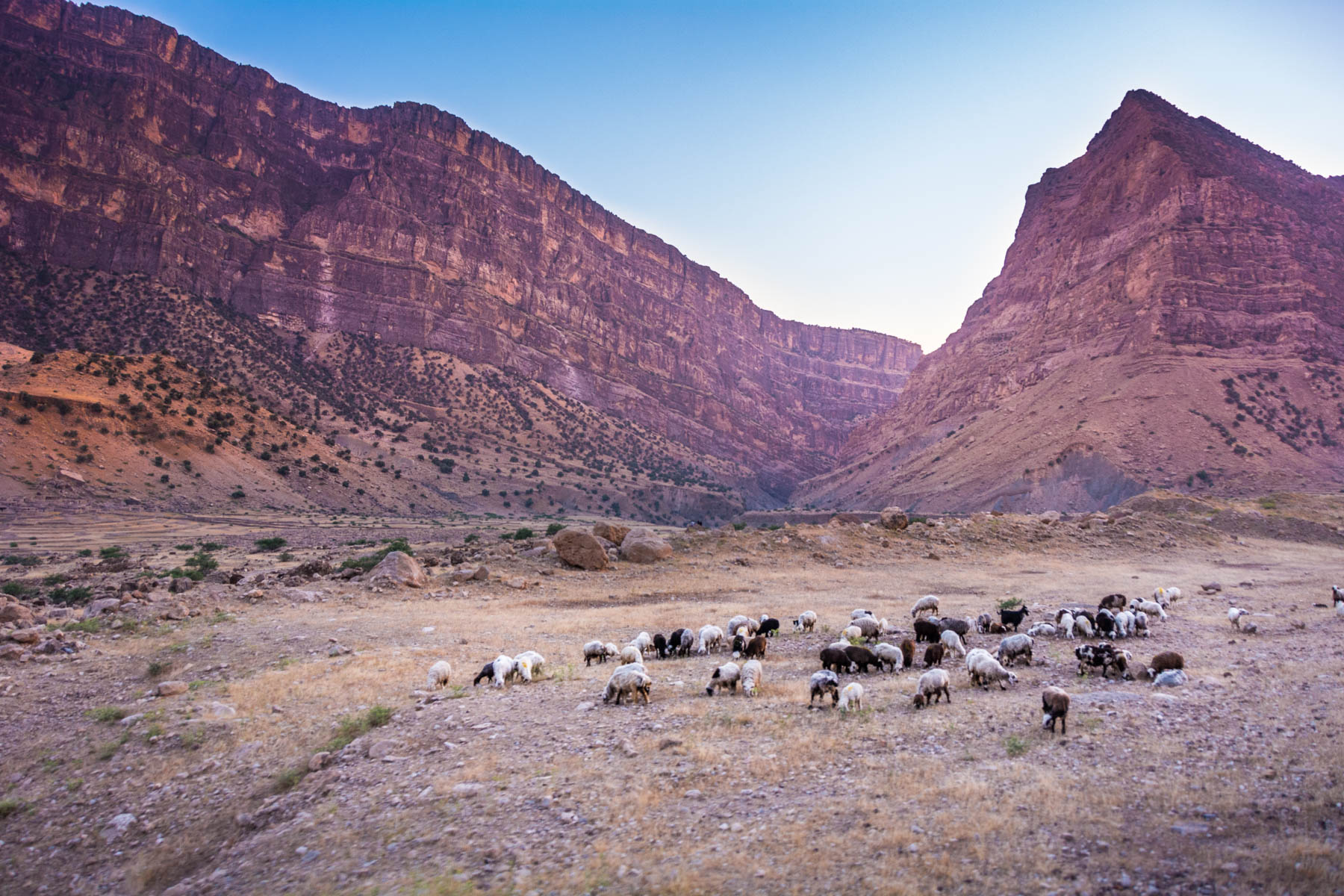 The view isn’t too shabby either. Hi sheepies!

Getting a train ticket for the train between Dorud and Andimeshk

The train can be taken both ways. As of April 2017,  it leaves Andimeshk (near Shush) around 04:00 in the morning, 12:00 in the afternoon, and there’s a train in the evening, too.  The train from Dorud (near Khorramabad) leaves at 14:30 or 16:15. It seems there is no clear consensus on the departure time. The best thing you can do us show up early enough to get a ticket for the (theoretical) 14:30 train. Tickets can be bought starting a day before departure in Andimeshk, and starting 13:00 on the day of departure in Dorud.

The line can get pushy, so make sure to be there early! (Also make sure not to take photos of the train station, so as not to attract police attention. Oops.)

Tickets are 20,000 IRR per person and the ride takes about seven hours. Be sure to bring enough snacks and water for the ride. 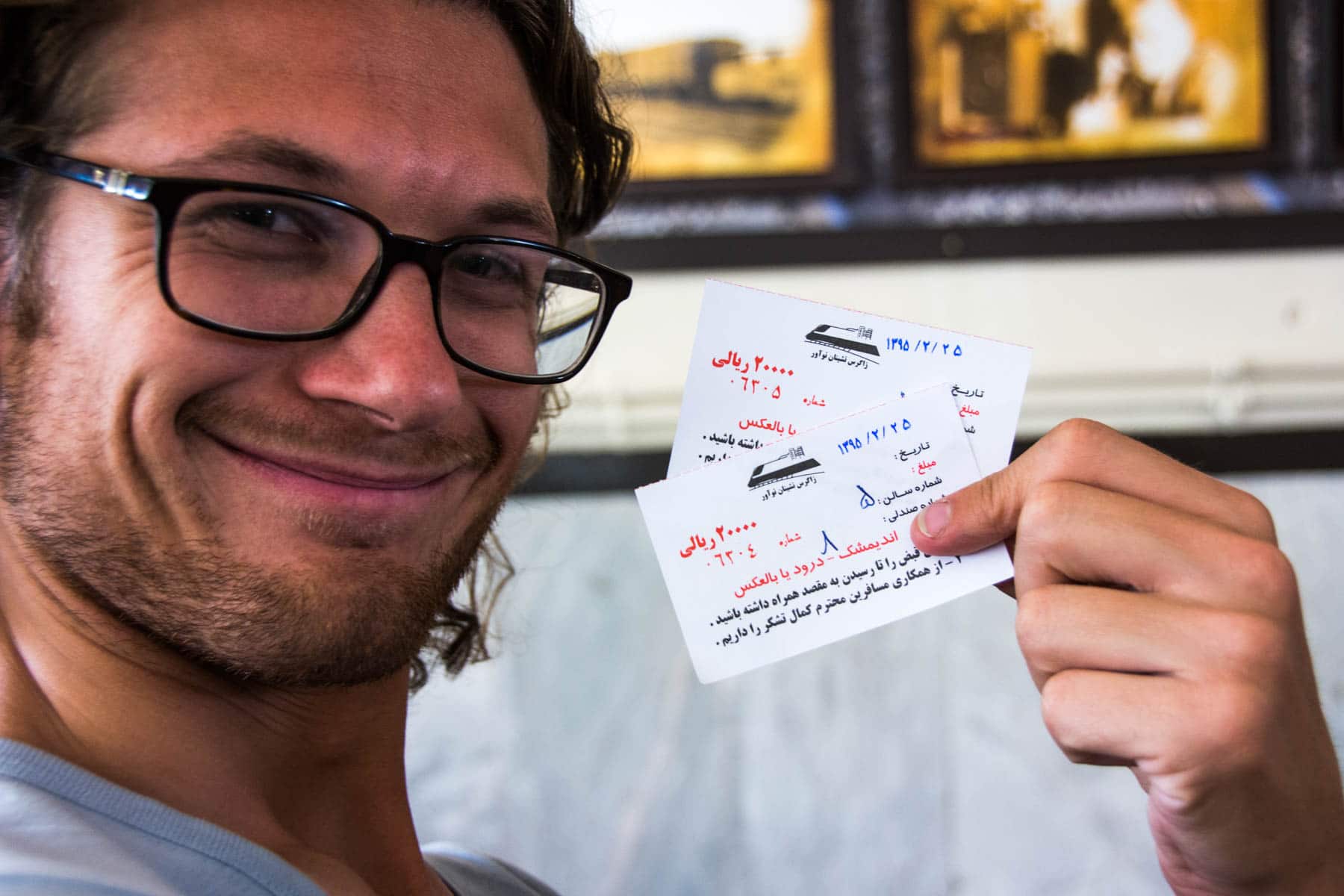 This train is notorious for being overcrowded, but being a foreigner in Iran, you’ll likely get VIP treatment. You’ll get to sit in the car with all the train personnel, where no common rabble is allowed. Make sure to pick a seat with a window that opens, so you can enjoy the fresh air and the incredible views. If you leave from Dorud, sunset will be on the right side of the train. 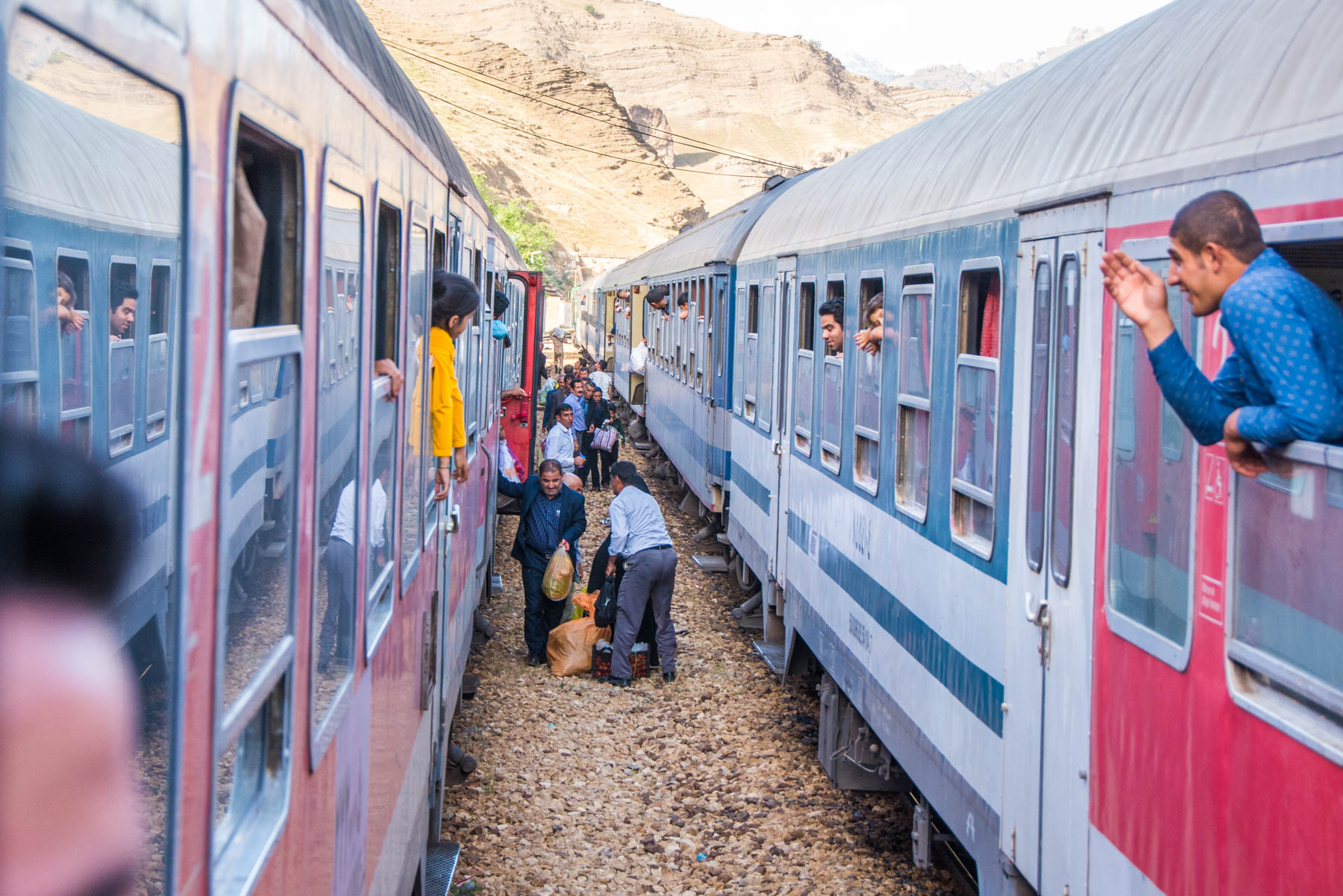 The train can get really full… 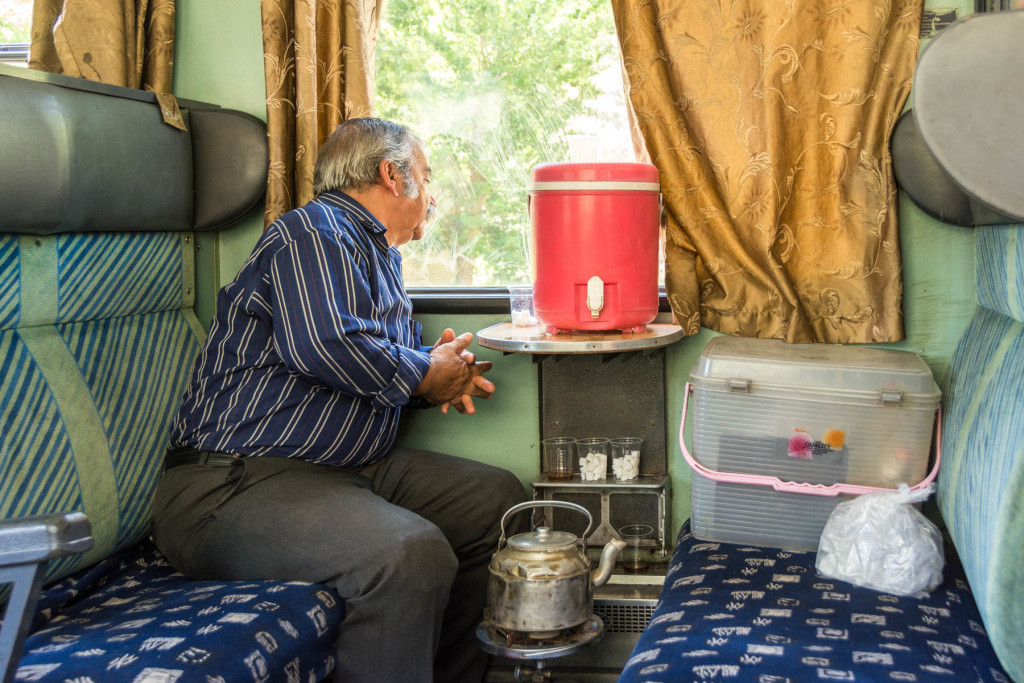 … but as a foreigner, you’ll probably be given plenty of space.

Getting to Dorud from Khorramabad

To get to Dorud from Khorramabad, take a savari. These cost 80,000 IRR per person and take about two hours. The savaris leave from Azadi Square. Be there early, it can take a while before they fill up.

Tell the driver gha-taar (sounds like Qatar), which means “train”. As Iranian taxi drivers are wont to do, he will probably try to charge you more for driving a whopping 3 minutes beyond Dorud terminal. Politely (or impolitely) insist that it makes no difference, and pay only 80,000 IRR. Our driver insisted that he deserved 40,000 IRR extra, but gave up after a minute, and decided to take selfies with us when he realized we weren’t going to pay.

Getting to Andimeshk from Shush

To get to Andimeshk from Shush you have to take a minibus. These are 15,000 IRR per person and leave when full. They leave from a minibus terminal on Khomeini Boulevard. Since the train leaves early in the morning, you should head to Andimeshk the day before. Minibusses don’t go that early.

Hotel Rostan, on Imam Street in Andimeshk, is close to the minibus terminal and costs 900,000 IRR for a private double with shower and wifi. The train station is about 15 minutes’ walking from Hotel Rostan.

Staying in the villages along the way

The train makes several stops at tiny villages along the way. If you have a tent and food, you can get off and camp virtually anywhere–it’s all pretty remote. Catching the train the next day shouldn’t be much of a problem, as long as you’re okay with standing if necessary. There’s not really a limit to how many people can get on at the villages, and the train clears out after a few stops. Be sure to take note of what time it is when you get off so that you know when to catch the train the next day. 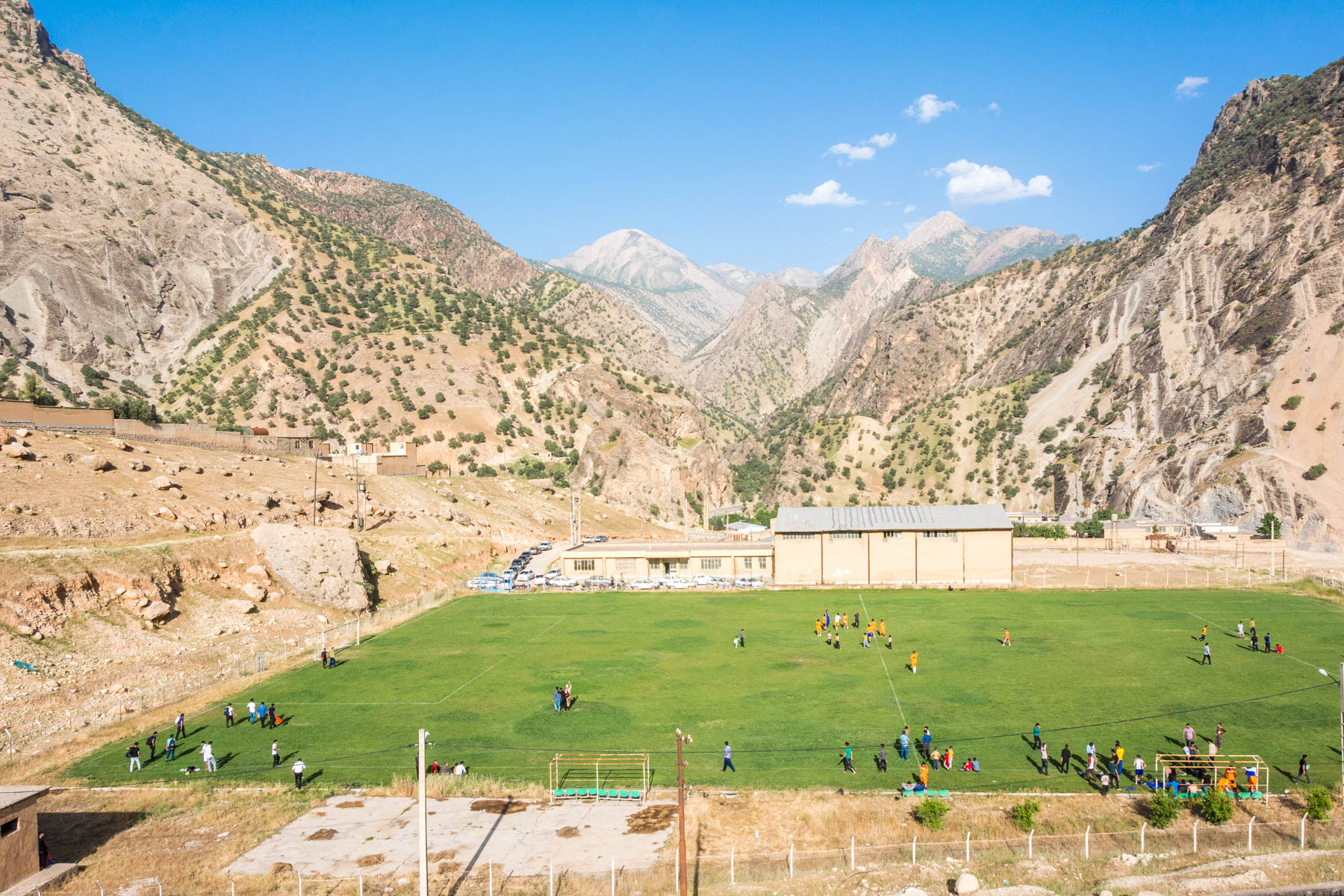 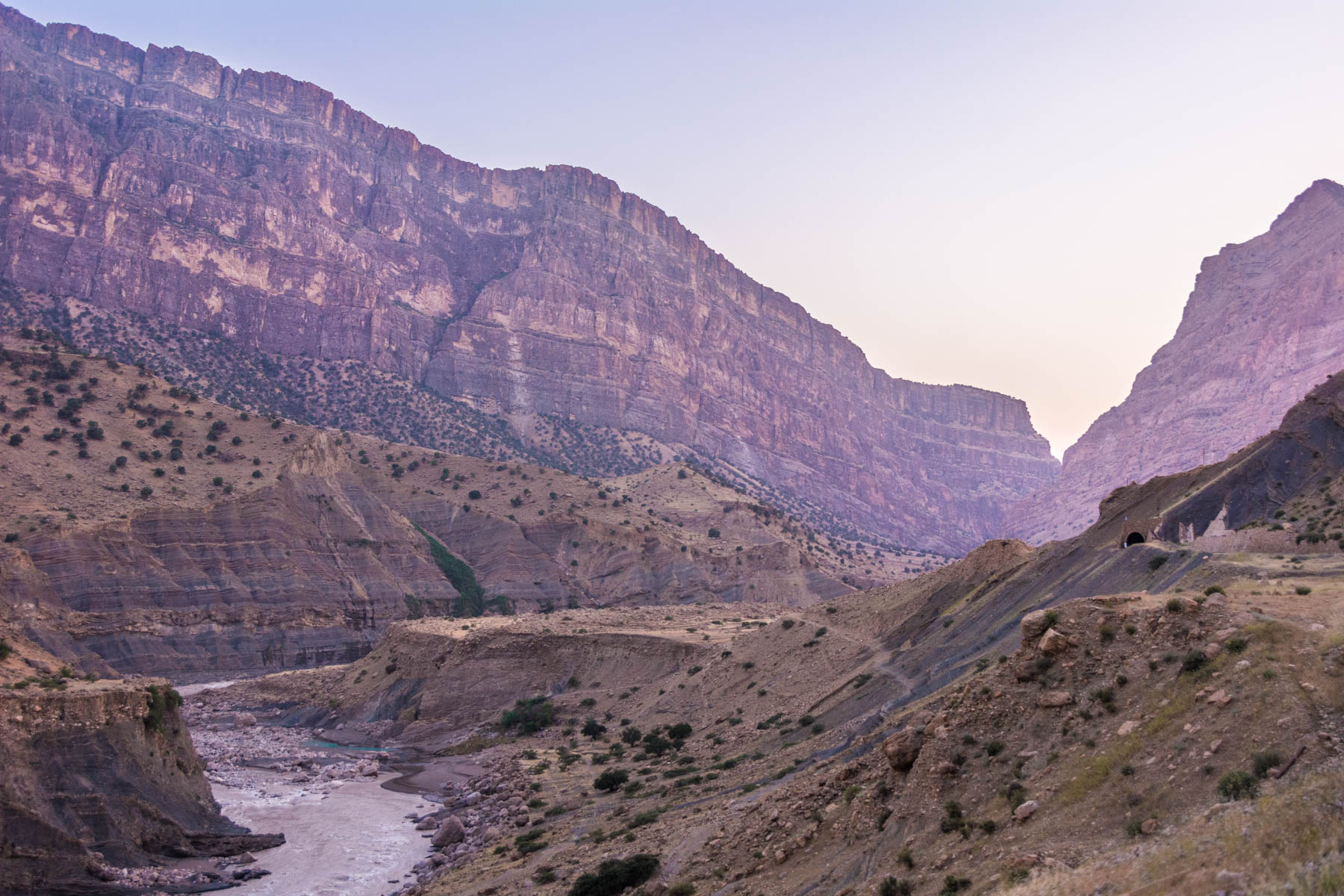 Even after the sun sets, the view is breathtaking.

So that’s our guide on taking the train from Dorud to Andimeshk or the other way around. One of the most scenic trainrides in Iran. Let us know in the comments if anything has changed.