Why We Didn’t Like Traveling In Xinjiang, China | Lost With Purpose

We’re on a mission to share what travel is really like in the countries that we’re trippin’ through–and that includes sharing the bad along with the good. We admit it: we didn’t like traveling in Xinjiang, China. Here’s why.

If you’re traveling to Xingjiang, or anywhere in China for that matter, make sure to get a VPN before you go. We used and recommend ExpressVPN when you travel to China. Check out ExpressVPN here for the best deals.

We left western China after only three weeks of travel.

The original plan was to travel around western and central China for two or three months. We’d enter from Pakistan, kick it in Xinjiang for a bit, get as close to Tibet as possible without having to get permits or be arrested, then exit through to Kyrgyzstan. We entered with high hopes, excited to explore a country that is so saturated with ancient history it’s fit to burst, that has a culture completely unlike any other in this world.

As the days progressed, we realized our expectations were too high. The China we imagined was far, far to the east, and Xinjiang province was more of a tense territory taken from other countries, rather than a true extension of China. Our days turned into drags, and we spent more time being frustrated, bored, and whinging about lost funds than actually enjoying ourselves.

Where’s the fun in that? 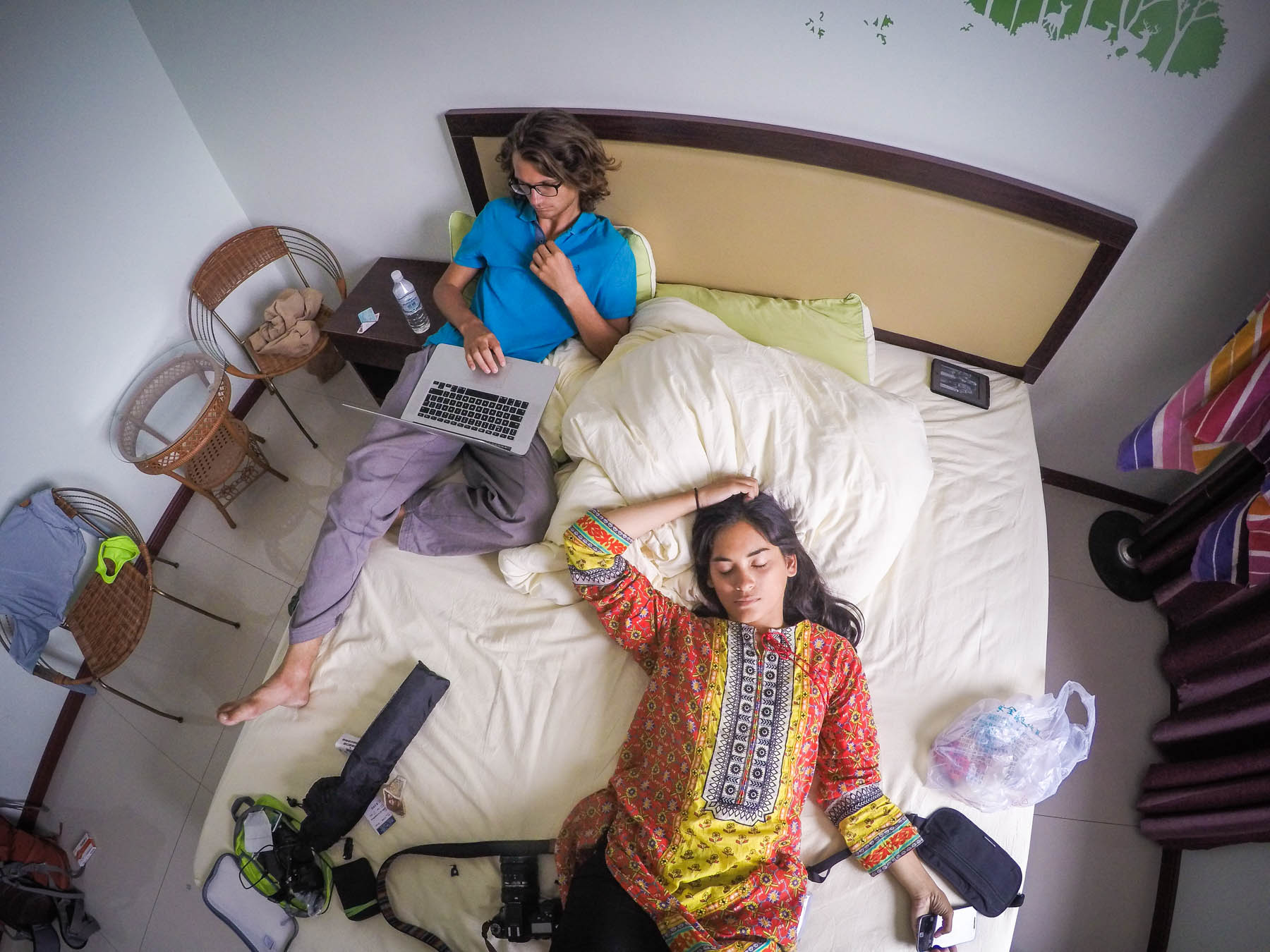 Hiding out in a hostel because sights are beyond our budget.

There was no point in forcing ourselves to enjoy something we found mediocre when so many other places were calling our names. We decided to throw in the towel on China for now, and save it for another day when we have more time, less of a Central Asian agenda, and have acquired several million dollars via a lottery/inheritance from mysterious distant relatives/getting a sugar momma or daddy.

Until that magical moment when we become millionaires (sugar daddies, take note) we’ll stick to blogging. And what kind of bloggers would we be if we left you hanging with a vague “we peaced out because it sucked”?

We’re not the kind of travel bloggers that spout lies to convince you of our “perfect” lives—we’re here to keep it real. Here are a few more reasons we didn’t like traveling in Xinjiang, China. Keep in mind while reading that these views aren’t necessarily true for all of China–this is just us venting about Xinjiang itself.

Traveling to Xinjiang from Kyrgyzstan? Check out this post on crossing the border between Kyrgyzstan and China! 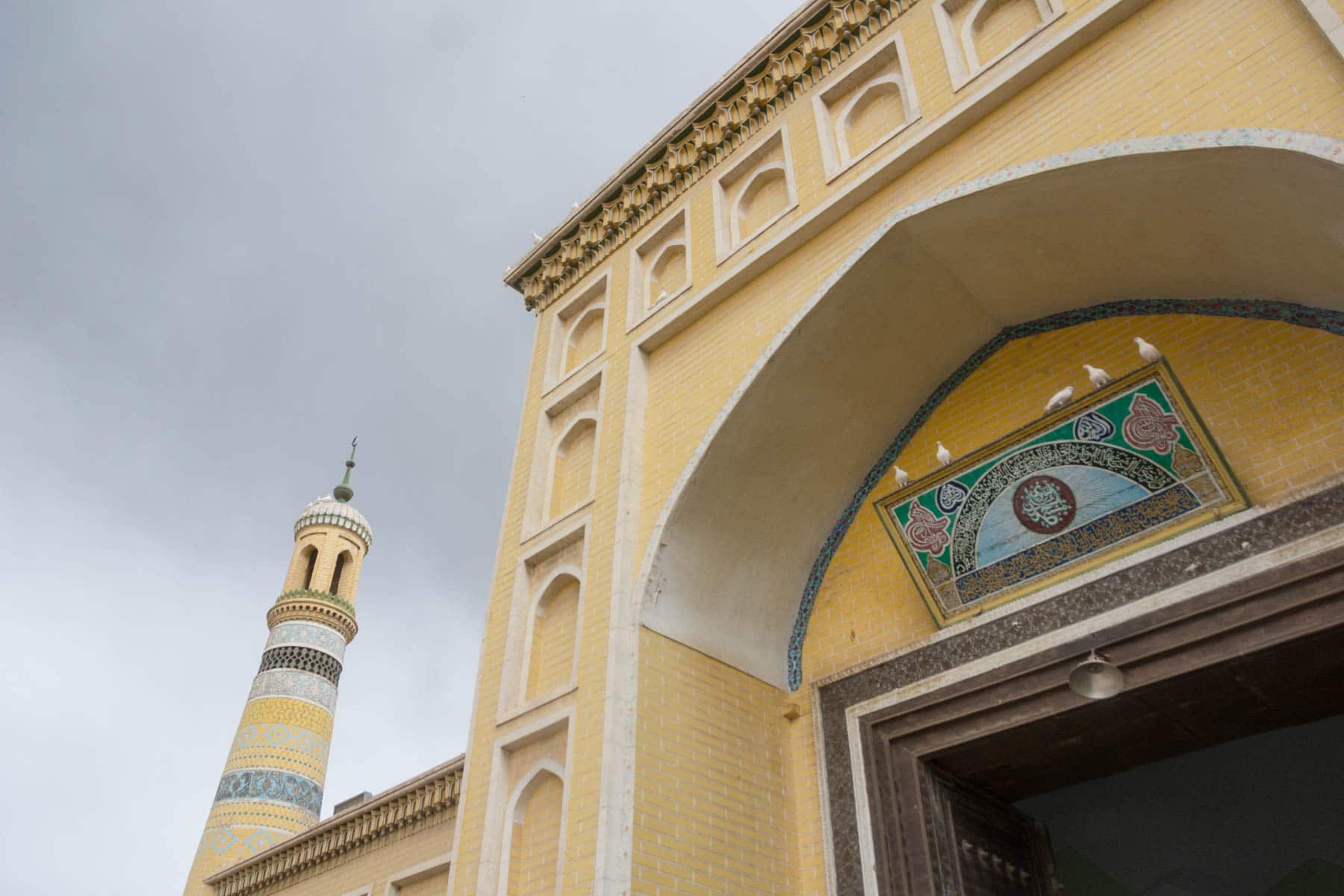 Despite being a functioning mosque, the Id Kah mosque in Kashgar entrance fee was equivalent to one night of sleeping.

The Chinese government loves money. They love it so much, they’ll charge you up the wazoo for everything and anything. And I mean everything.

We don’t mind spending a bit of money on sights, but when you have to empty your pockets for literally every single pointless pebble, we draw the line.

Add in the facts that a train to anywhere costs more than our daily budget, a bed in a dorm costs the same as a three-star hotel in Georgia, and active religious sights actually cost money unlike the million and one epic religious sights in Armenia, and you begin to see why western China wasn’t our flavor of the day. 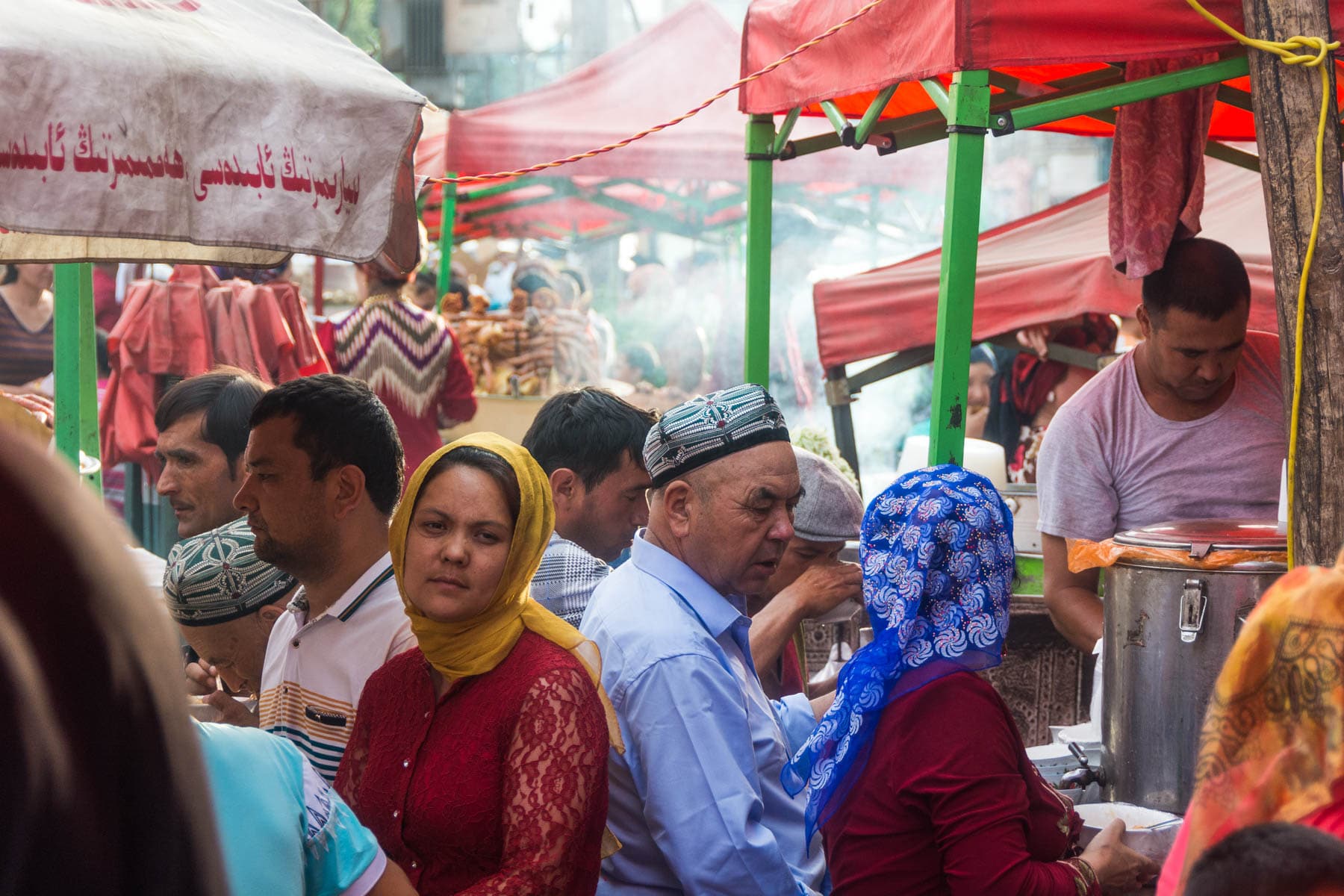 No love, only stares.

We never felt particularly welcome when traveling in Xinjiang. People’s attitudes ranged from indifferent to downright hostile. The most common response we got when we asked people on the street a question was meiyo!–no, not possible–and a wave of the hand. Begone foreigner! You’re not wanted here. Just give us your money and leave.

Rumor has it that the local Uyghur population is usually very kind, but our experience was different. We never felt particularly welcome walking around Uyghur neighborhoods. In the true old town of Kashgar, no one would respond to our greetings.

People in Tuyoq Valley refused us entry into streets and shrines with cold stares. When hunting for lunch options in Kuche, people just glared at us as we moved towards places to sit, not turning around until we had grown uncomfortable and moved on.

It might be a side-effect of the suppression of Uyghur culture and people at the hands of the Chinese government – which has only gotten worse since we left – or perhaps we’re just scary lookin’ folks. Who knows? Everyone has their own experience, so yours may be different from ours. 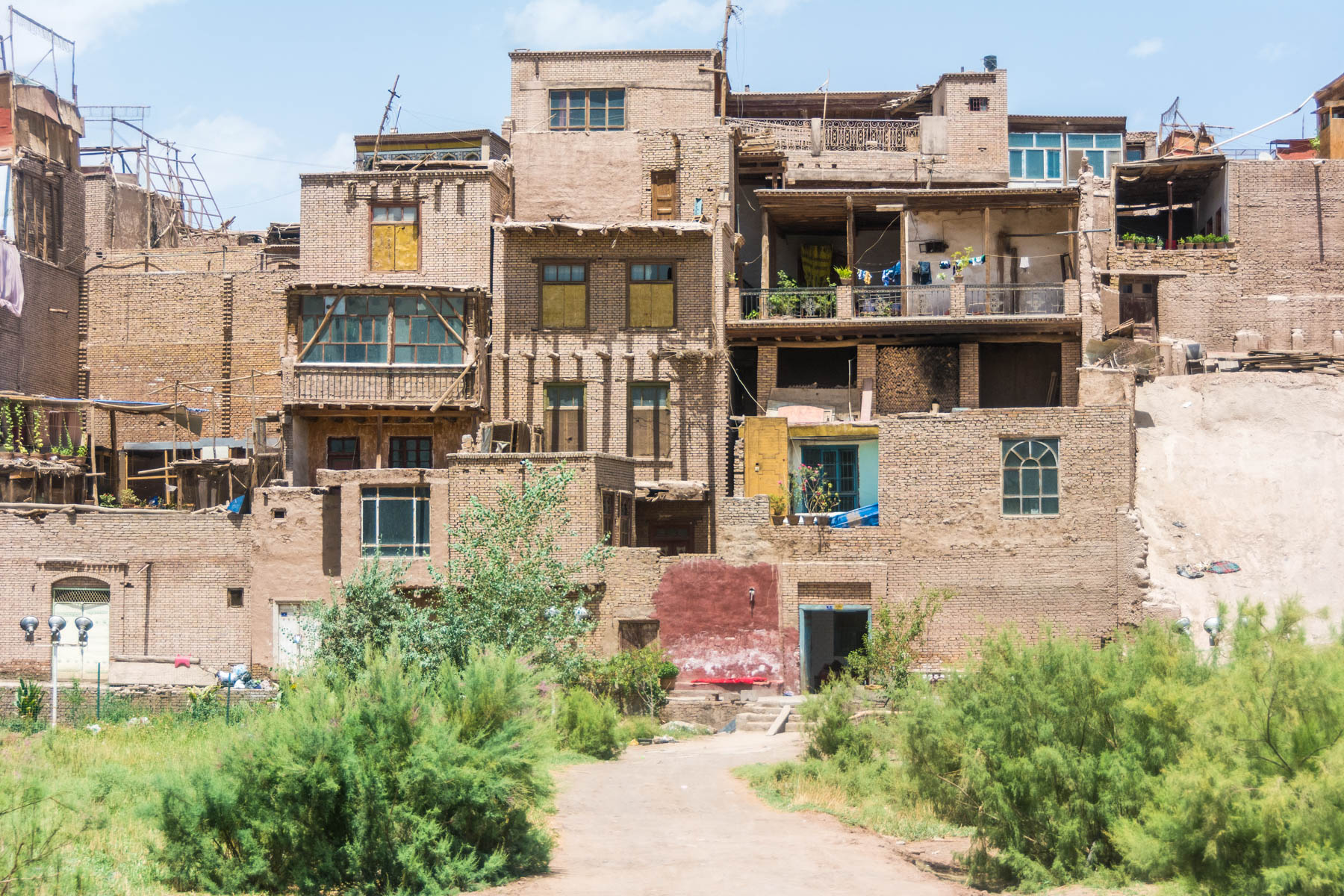 The last remnants of the old Old Town of Kashgar, the rest of which has been demolished in favor of a new, more polished “Old” Town.

The Disneyfication of tourism in Xinjiang

China seems hell-bent on destroying its sights. The process for developing tourist sights in the west seems to be: 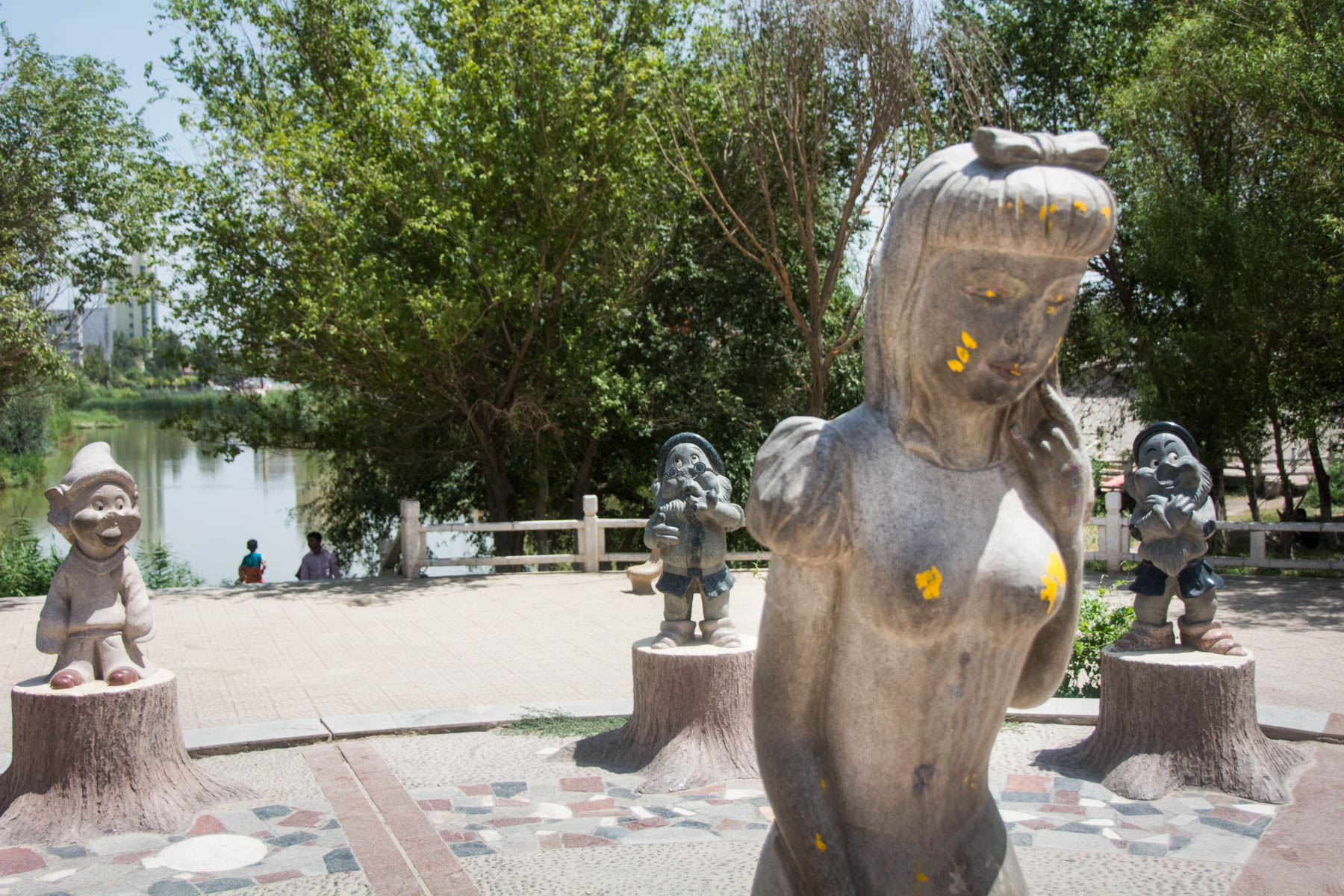 And this being China, some literal Disneyfication as well.

In addition to the charmingly Chinese development process, there’s also the issue of the way the historical sights are presented. Most of Xinjiang, the “far west” of China, is basically land that China laid claim to in recent history. The museums and sights are filled with propaganda, re-crafting Uyghur history and culture to fit the Chinese government’s seemingly happier (and more Chinese) narrative. Xinjiang? Xinjiang is China and has always been China. Uyghurs? No, they are simply Chinese… with a slightly different ethnic background that we will choose to ignore. 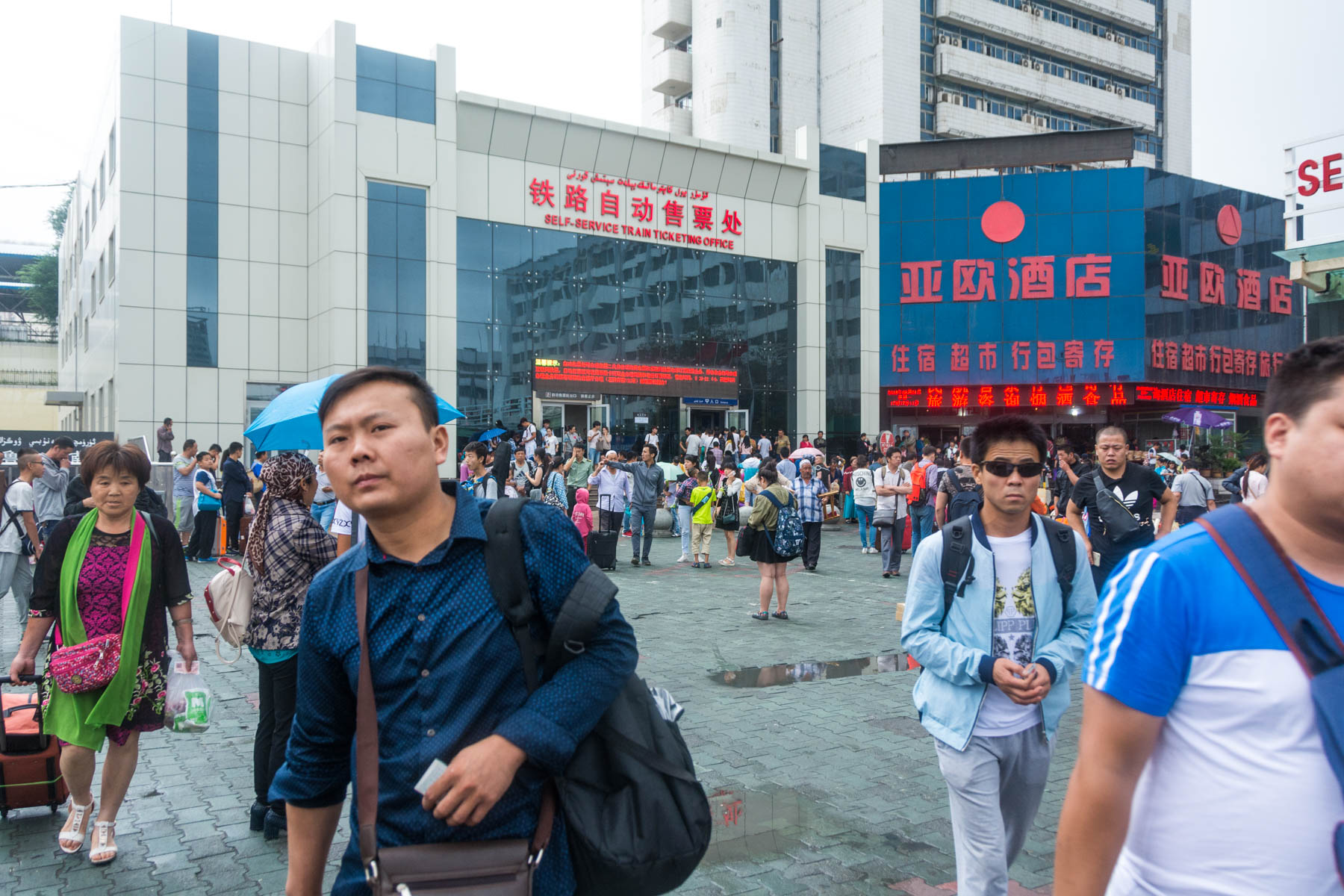 Local folks waiting to go to the three–yes, three–security checkpoints to enter the train station in Urumqi.

What’s the most deadly article you’ve carried on you while traveling?

For us, it’s deodorant.

Forget the pocket knives, toxic bug spray, and baton-like selfie stick–the ever-so-clever Chinese security deduced that spray deodorant was our weapon of choice. Multiple cans of our deodorant were confiscated because ??? We might kill someone with freshness? Craft a bomb with our B.O.-begone? Do I look like fucking MacGyver to you?!

China doesn’t want citizens to be independent, self-thinking, or critical–it would be dangerous for the Party. Instead, it has created an army of mindless security drones who refuse to do anything except following paper orders to a T. And these totally arbitrary security restrictions drove us insane. Even more so than security in Pakistan (and that’s sayin’ something).

Paper says groups are not allowed to intermingle at the border. You must stand by your bus, and stop speaking to the person in line before you. Shouted conversations across the compound to said person are acceptable, however–the paper says nothing about that.

Before the rant ends: a caveat about traveling in Xinjiang

Traveling isn’t always going to be fun, and it’s easy to get sucked into a negative mindset. It’s important to remember that traveling is a privilege not granted to many, and we should be fortunate for what we do have, even if it is frustrating at times.

So let’s end this on a positive note, shall we? Despite the frustrations and pains, there was one shining beacon of excellence throughout our time in Xinjiang: the food. 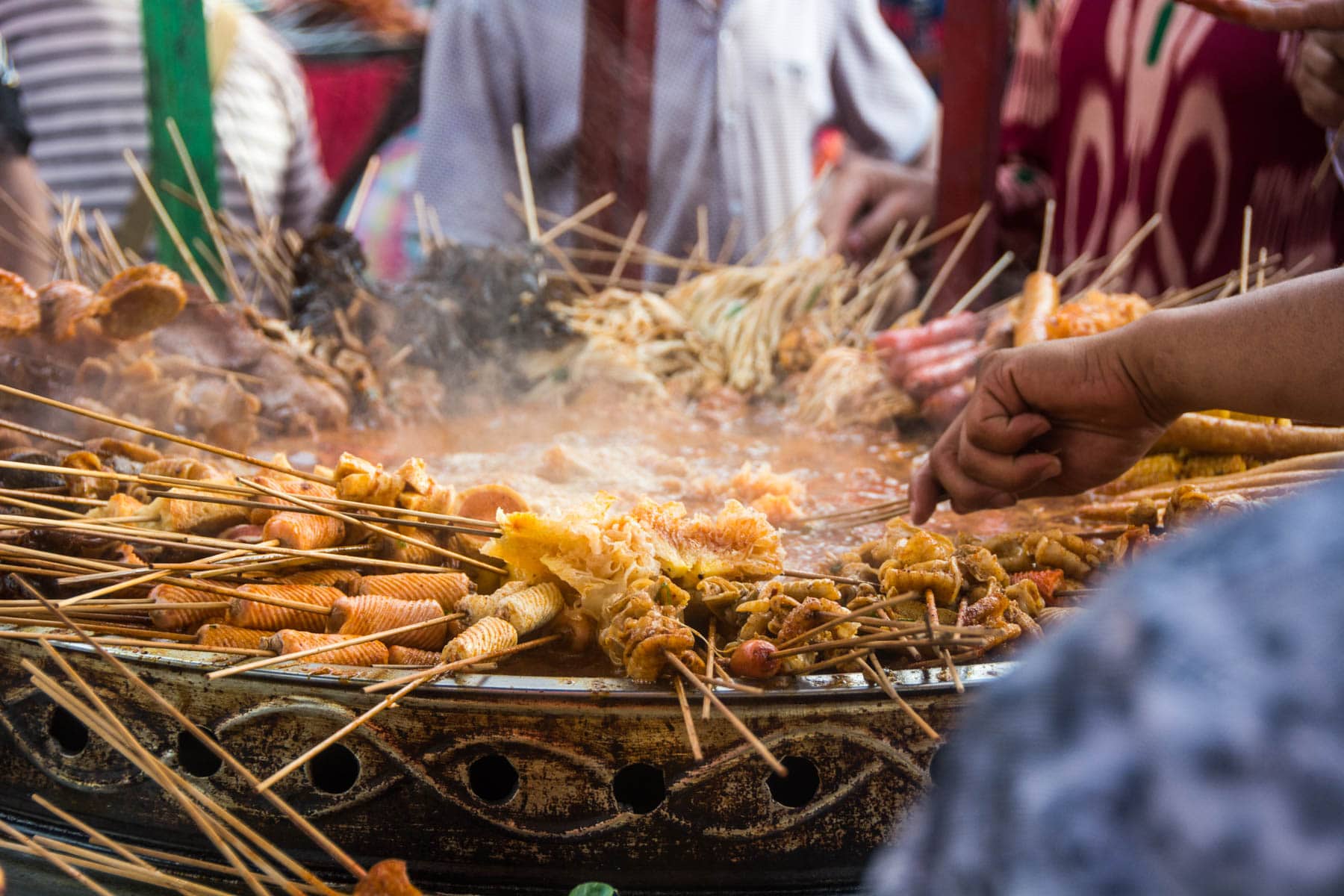 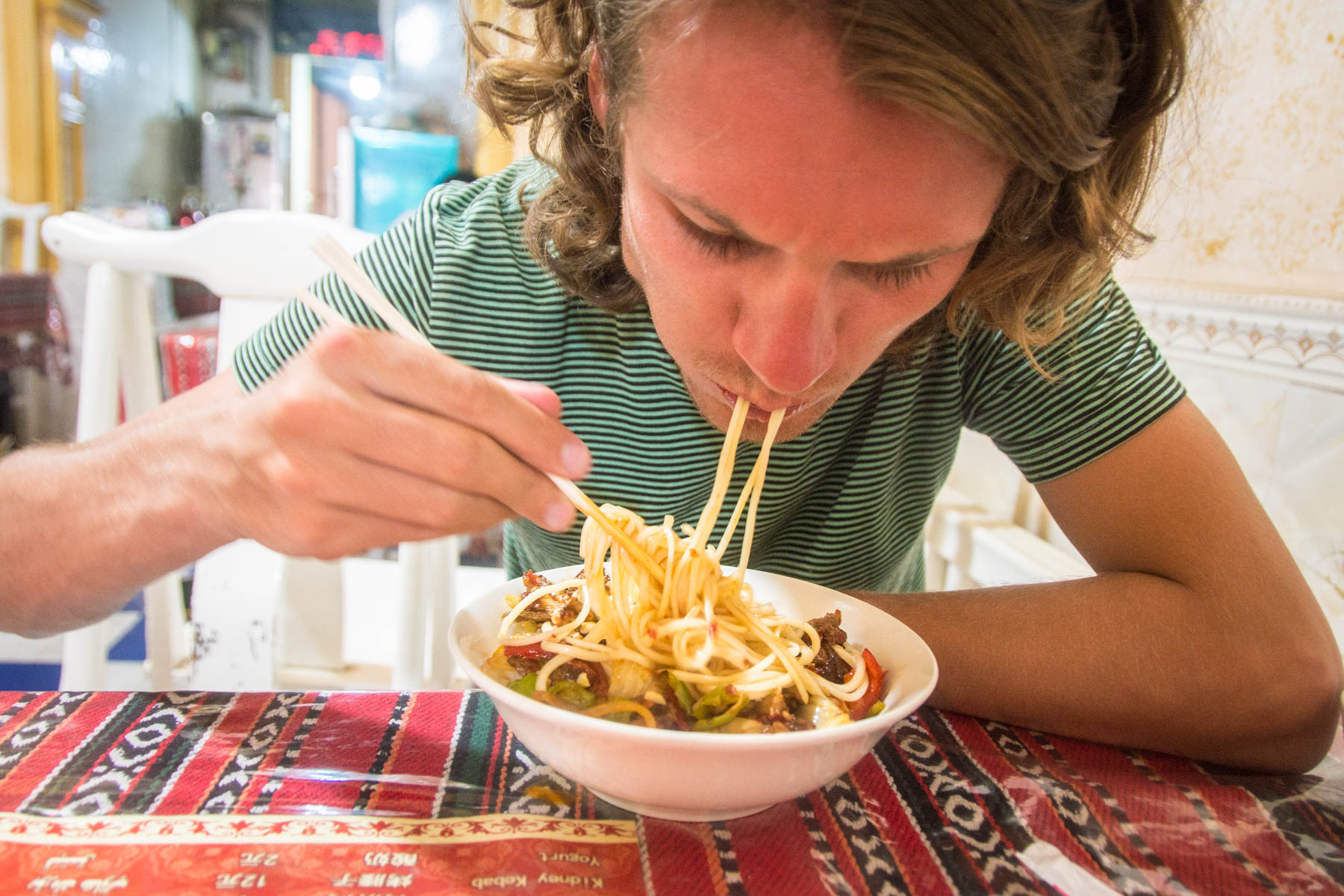 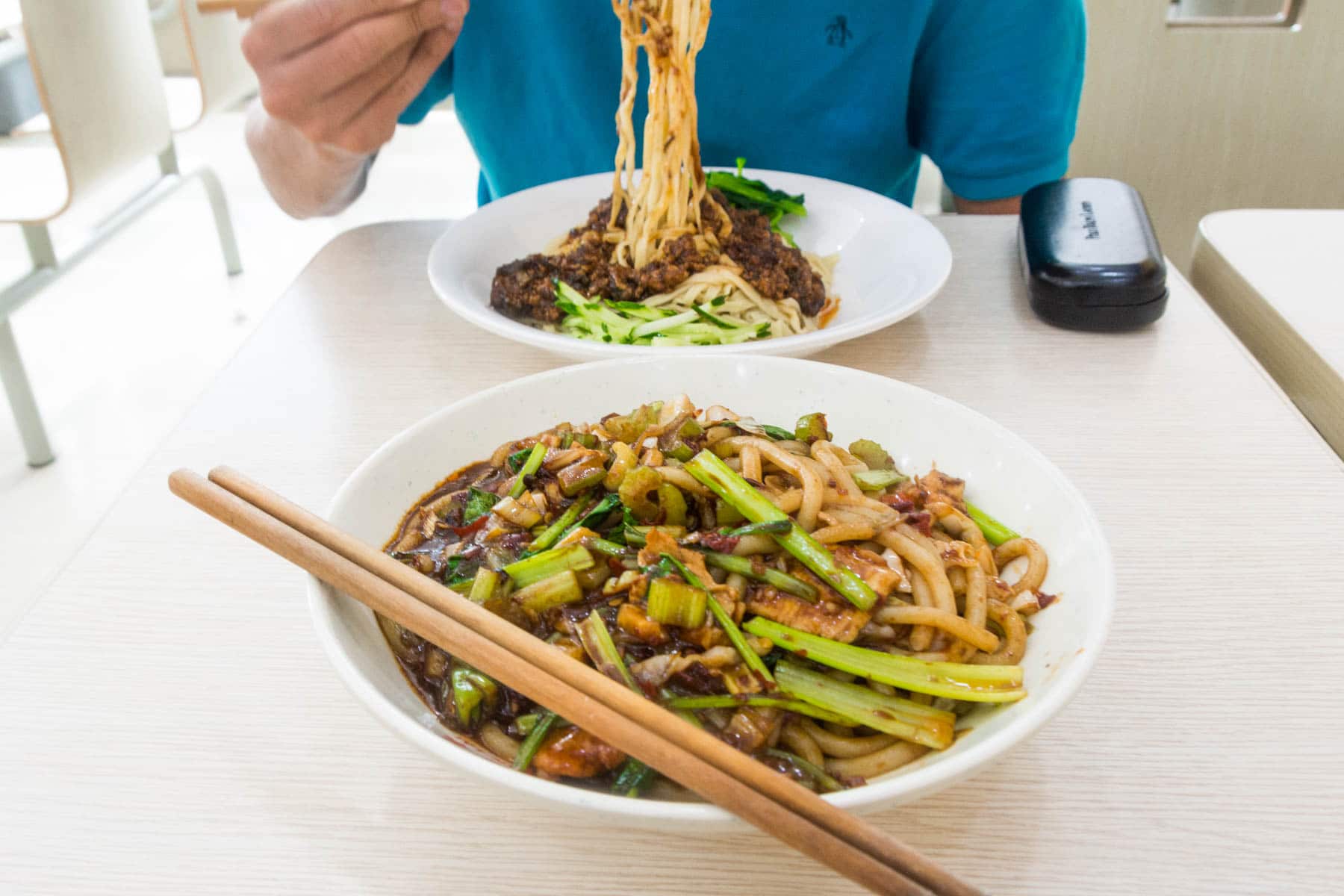 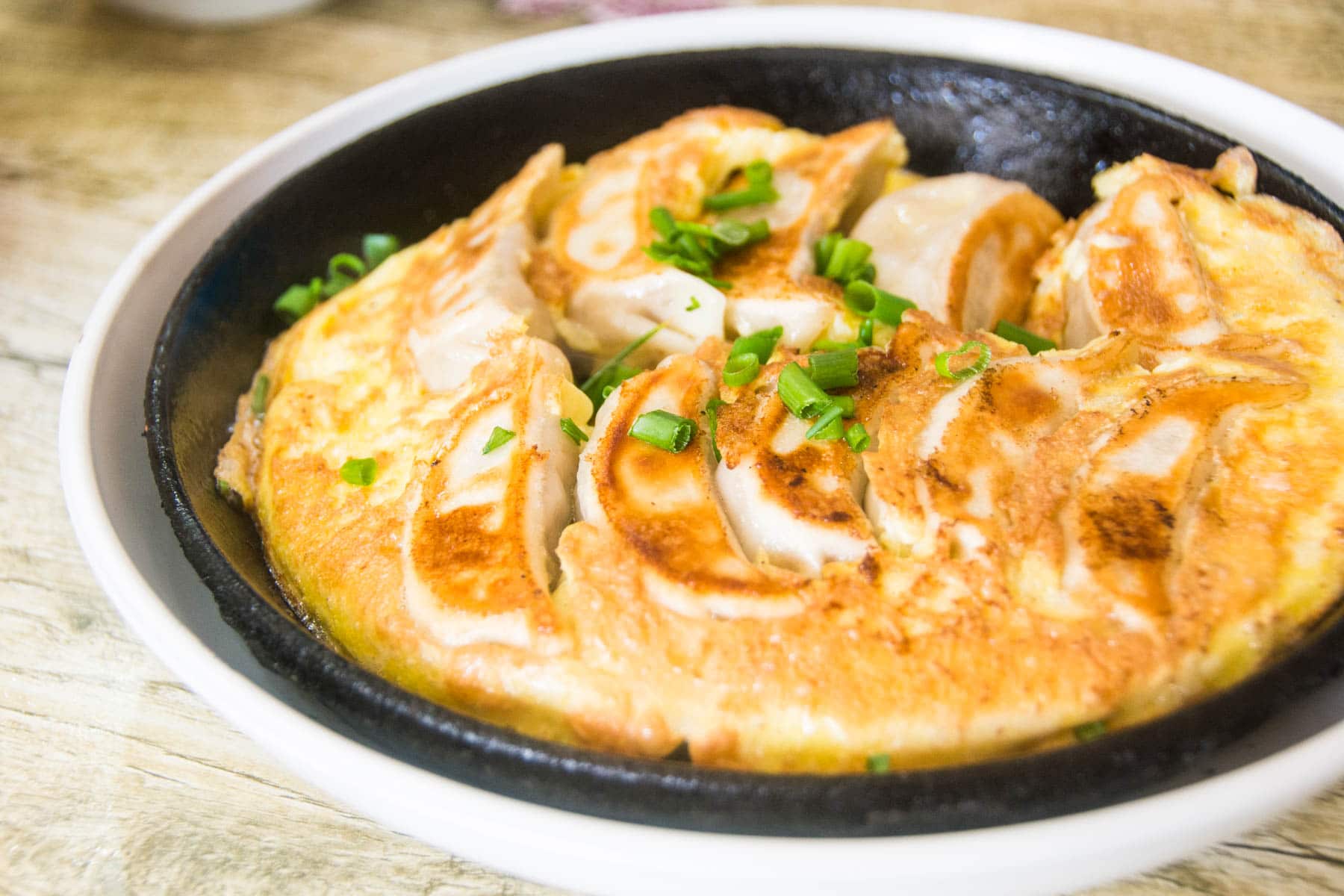 The grand finale: EGGS. AND DUMPLINGS. ALL AT THE SAME TIME.

At least we can say we left China with contented bellies.

Heading to China soon. Check out this post on things to do in China. 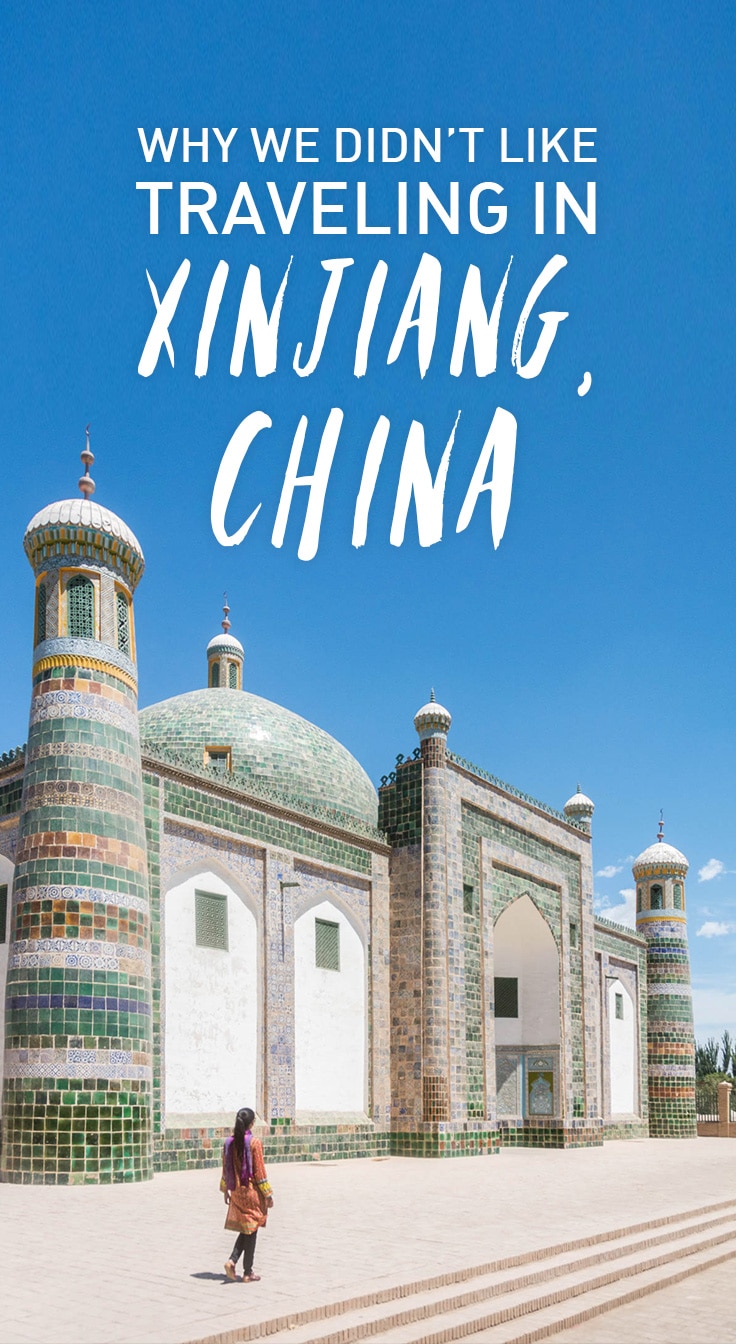 Have you ever traveled to a country, only to leave disappointed? Which country? What happened?