Three frustrating beasts, one massive lake, and a lot of gorgeous steppe: our tale (tail?) of a Kyrgyz horse trek. Head to the end of the post for information on how to independently arrange a horse trek to Song Kul lake in Kyrgyzstan.

After five minutes on this horse, I know this will be awful.

Dark (like his soul) and bristly (like his personality), he knows I am but a tourist in Kyrgyzstan, and thus decided there is no need to listen to any of my commands.

Or move, for that matter.

I, however, have other plans. Over the next few days, Sebastiaan and I are to ride through the mountainous steppe to Song Kul, Kyrgyzstan’s largest freshwater lake. Sitting at over 3,000 meters high, and stretching for 29 kilometers, the remote lake is a summer home to many a nomadic family who come to graze their flocks on the lake’s grassy shores. It’s one of the things to do in Kyrgyzstan.

The plan is to ride from the village of Kyzart, through the 2,664 meter high Kyzart pass, to one of the family-run yurt camps on the lake’s shores. 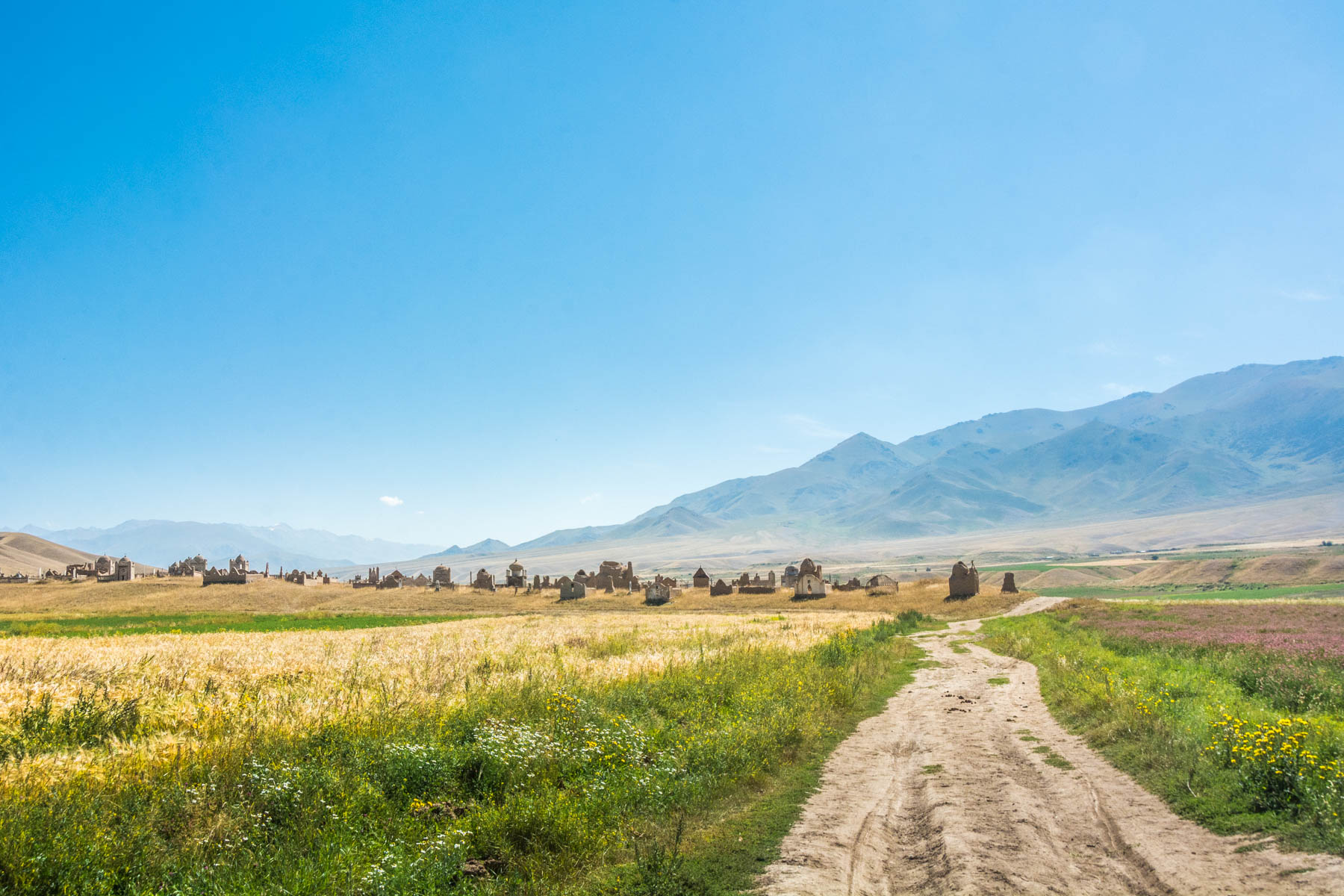 Kyzart, Kyrgyzstan, the starting point of our sluggish venture.

All I need to do now is make the horse move… easier said than done.

Nudging it with my heels proves futile, so I give it a firm series of kicks, to no avail. A thrust of the hips, a technique recalled from bygone years of riding, causes him to snort with irritation and step backwards.

Time to try vocals: “Chuu! Chuu!” The common cry of Kyrgyz horsemen gets me a salty stare from the corner of the horse’s eye. When paired with a slap on the bum, his ears turn back and down—a sign that I’m sitting on one pissy pony.

Should I ask for a whip? All Kyrgyz horsemen carry one, and they certainly aren’t afraid to use them. The moment of consideration passes quickly—whipping is brutal, and at home I was taught a good rider never needs to use a whip. I will find my own way to master this blasted beast.

After minutes trying various combinations of shouting and thrusting, our Kyrgyz guide rides up behind my horse and gives it a massive smack with his whip. With a start, we’re trotting. I give the horse another nudge with my heels to increase the pace, and he stubbornly slows to a walk. 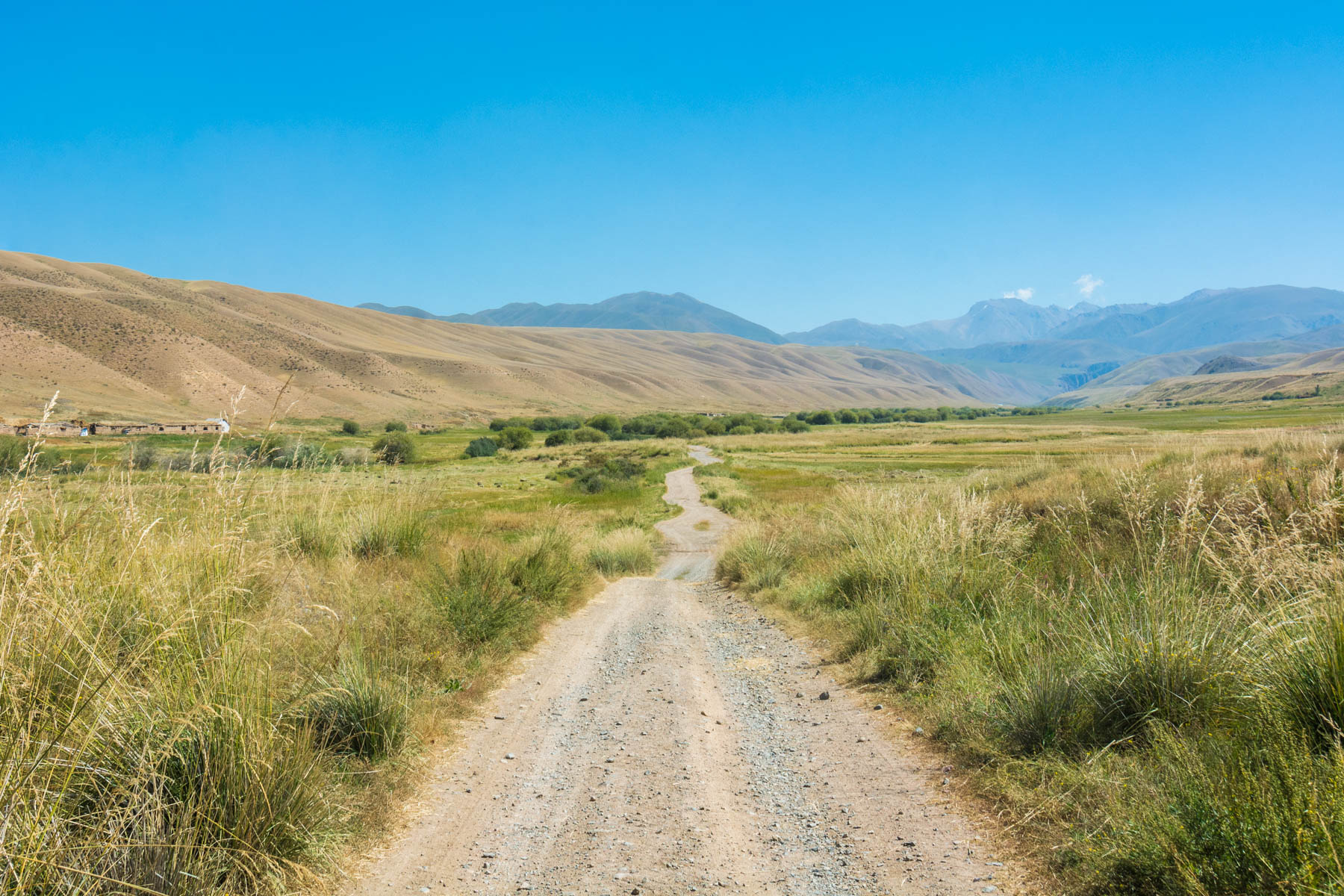 For six hours, we ride through golden, rolling hills, zig-zag through stony outcrops in Kyzart pass, and cross over peaks overlooking the vast waters of Song Kul. 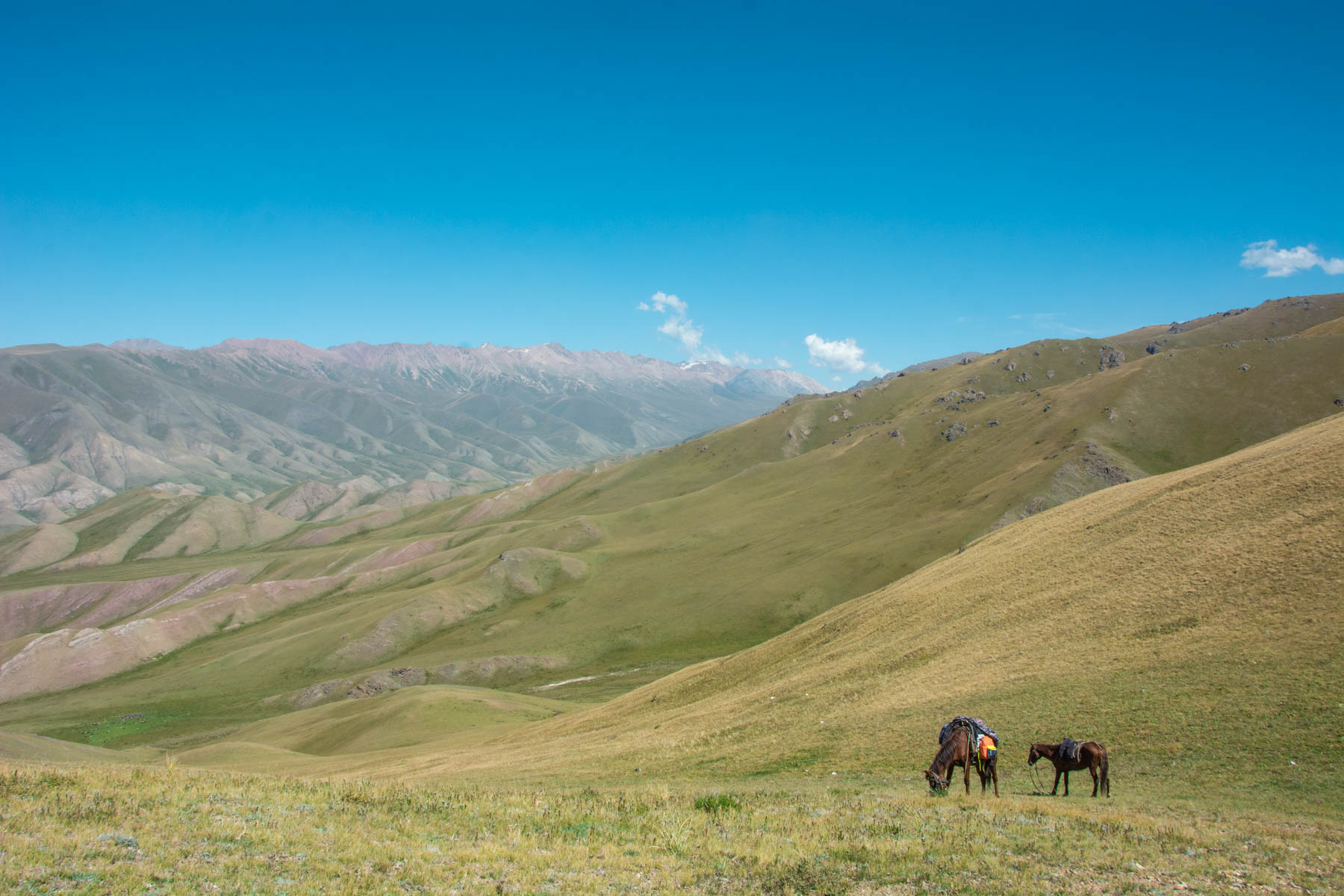 Nomads, conquerors, and Silk Road merchants alike have traversed these hills in past millennia, and it’s easy to believe that nothing has changed since. There are no paved roads, no power lines. Only blue sky, grazing animals, and the occasional yurt. 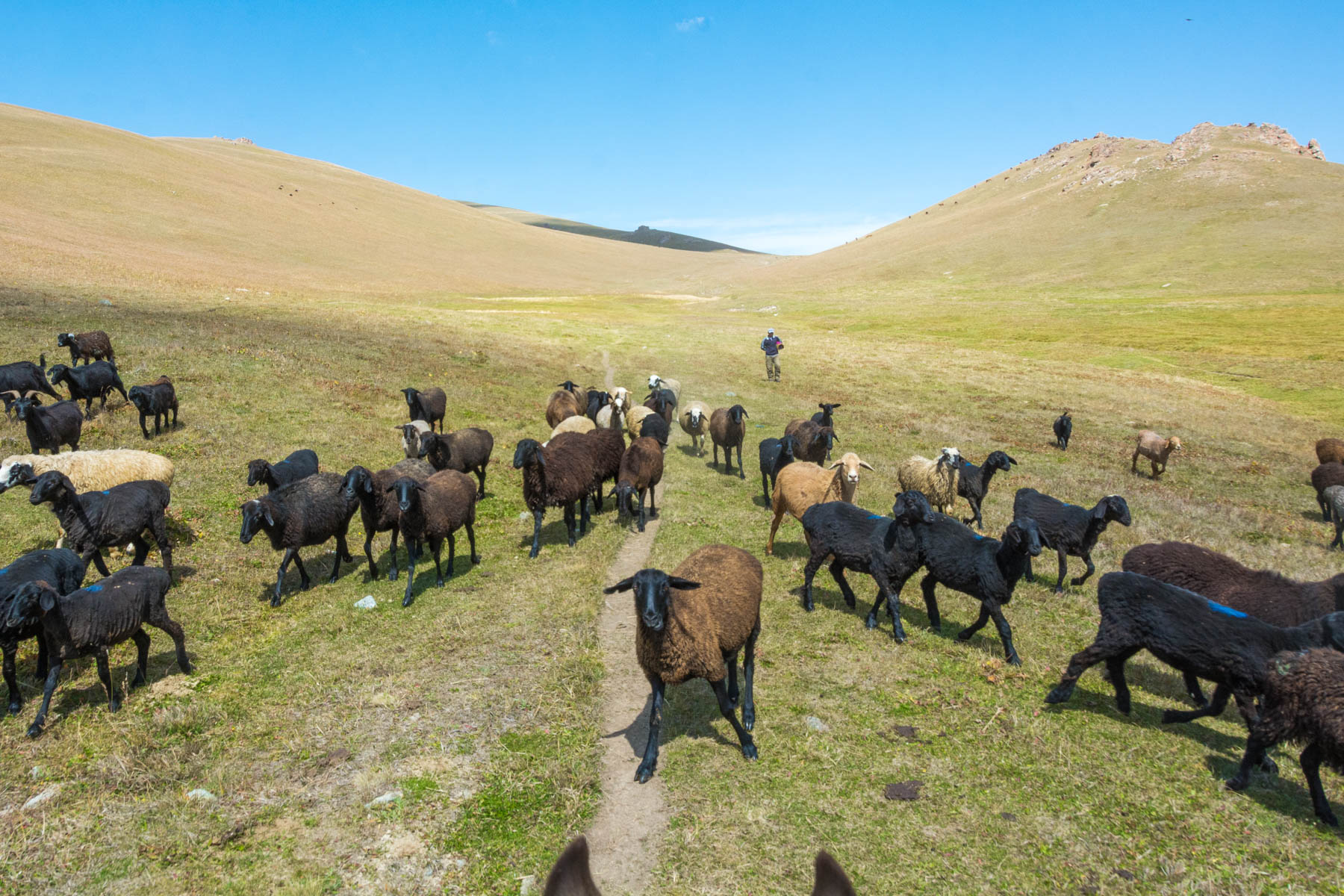 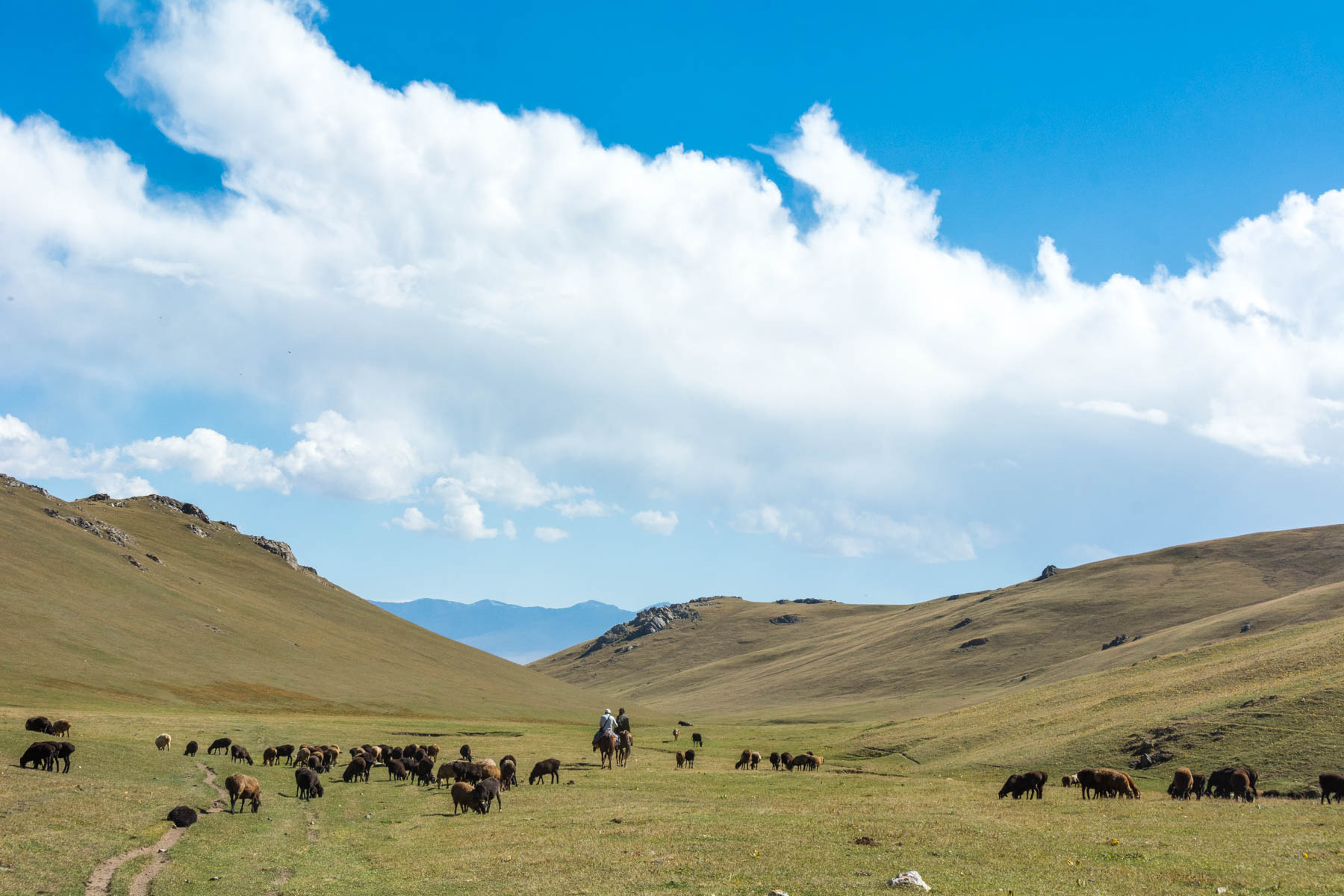 … not that I care. My horse hasn’t moved faster than a walk since the initial burst of trotting, and often refuses to move at all. I’ve spent the last hours staring at the speck-sized backs of Sebastiaan and our guide from a kilometer away.

All I want to do is ride this god-forsaken horse to the glue factory.

The sun begins to set as we (finally) reach the yurt camp, and it is time to part ways with our horses. I give mine the obligatory pat on the neck, thanking him for his [lack of] service. Being a crafty horse, he detects my lack of sincerity and walks off in reply. Bastard.

Heading to Kyrgyzstan? Make sure to check out our backpacking in Kyrgyzstan budget report! 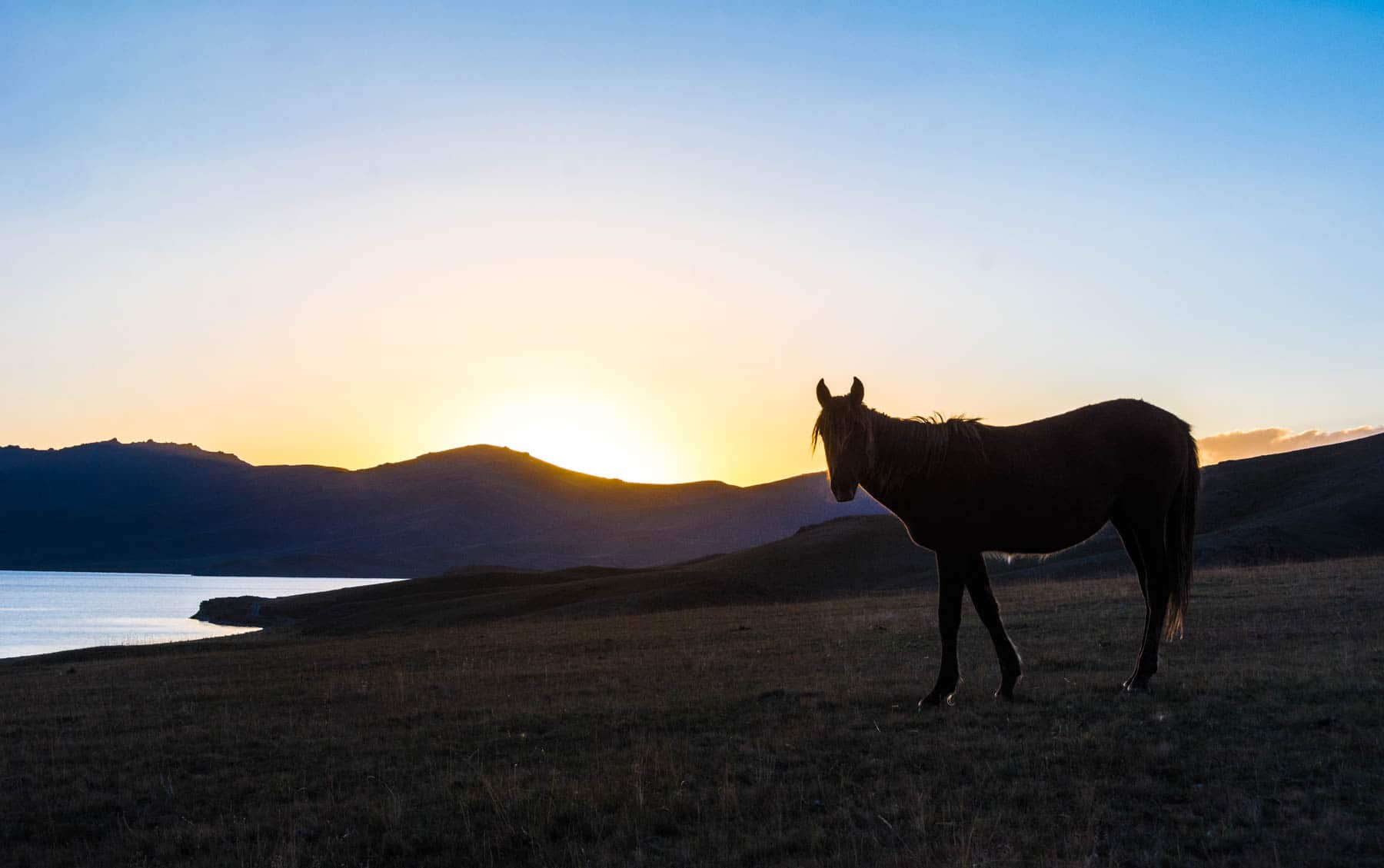 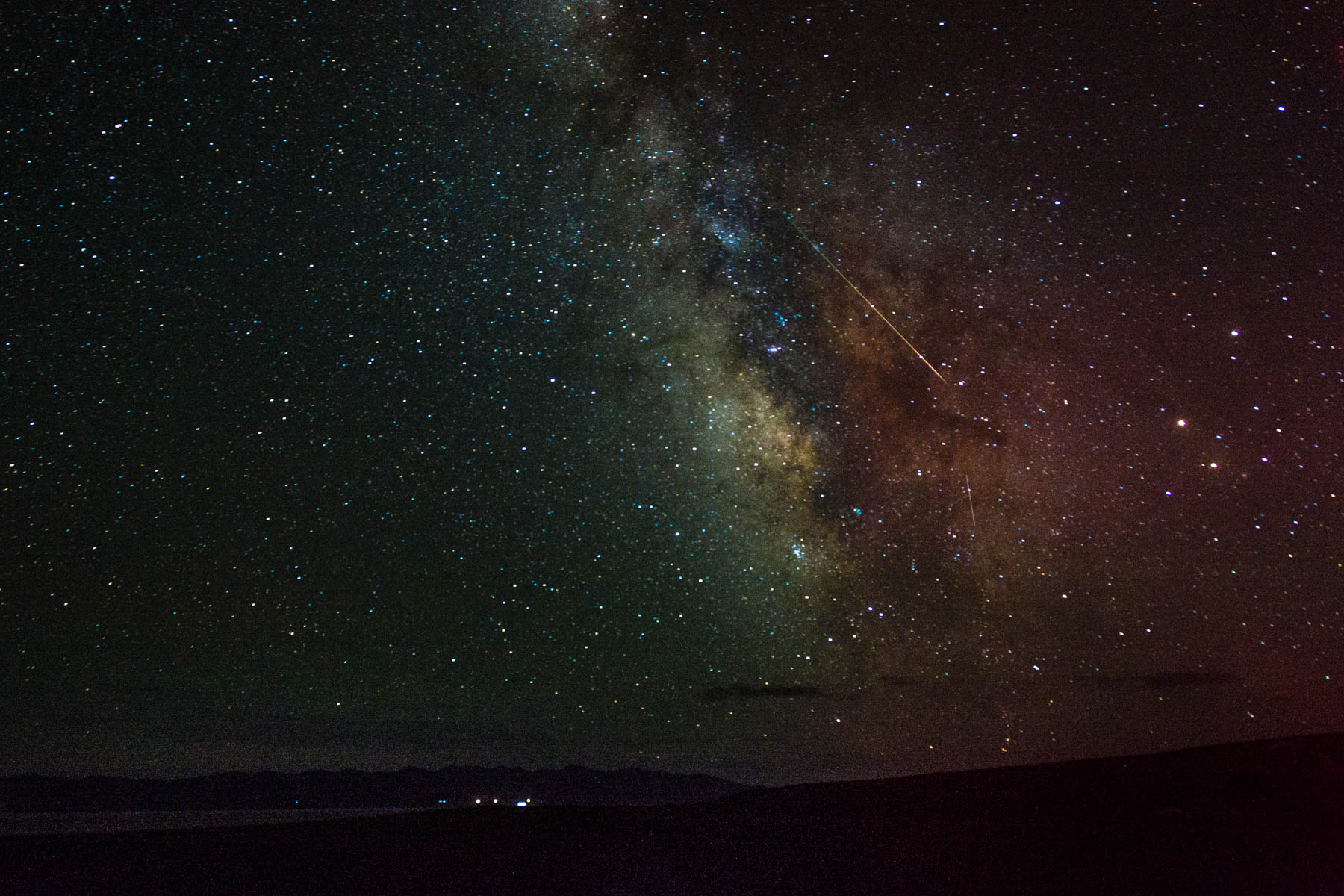 On the bright side: bright nights!

The next morning begins in much the same way–going nowhere.

A local man clambers onto the saddle behind me, attempting to show me the proper Kyrgyz way to ride. The horse is grouchy about the extra weight, but his stubbornness is eventually worn away by the extra 80 kilos of loudly roaring, hard kicking, whip-cracking Kyrgyz man. I sit in front of the man like a demure bride riding away on her wedding night, completely useless as he magically manages to make the horse gallop around the camp.

The horse begins to heave from shuttling around two people at once, so the man clambers off, taking his whip with him. He tells me to try again, but the horse is no fool–I am light, soft-voiced, and most importantly, whipless. Despite my throaty attempts at a Kyrgyz manvoice, we go nowhere, and I must resort to being herded through the steppe by our guide. 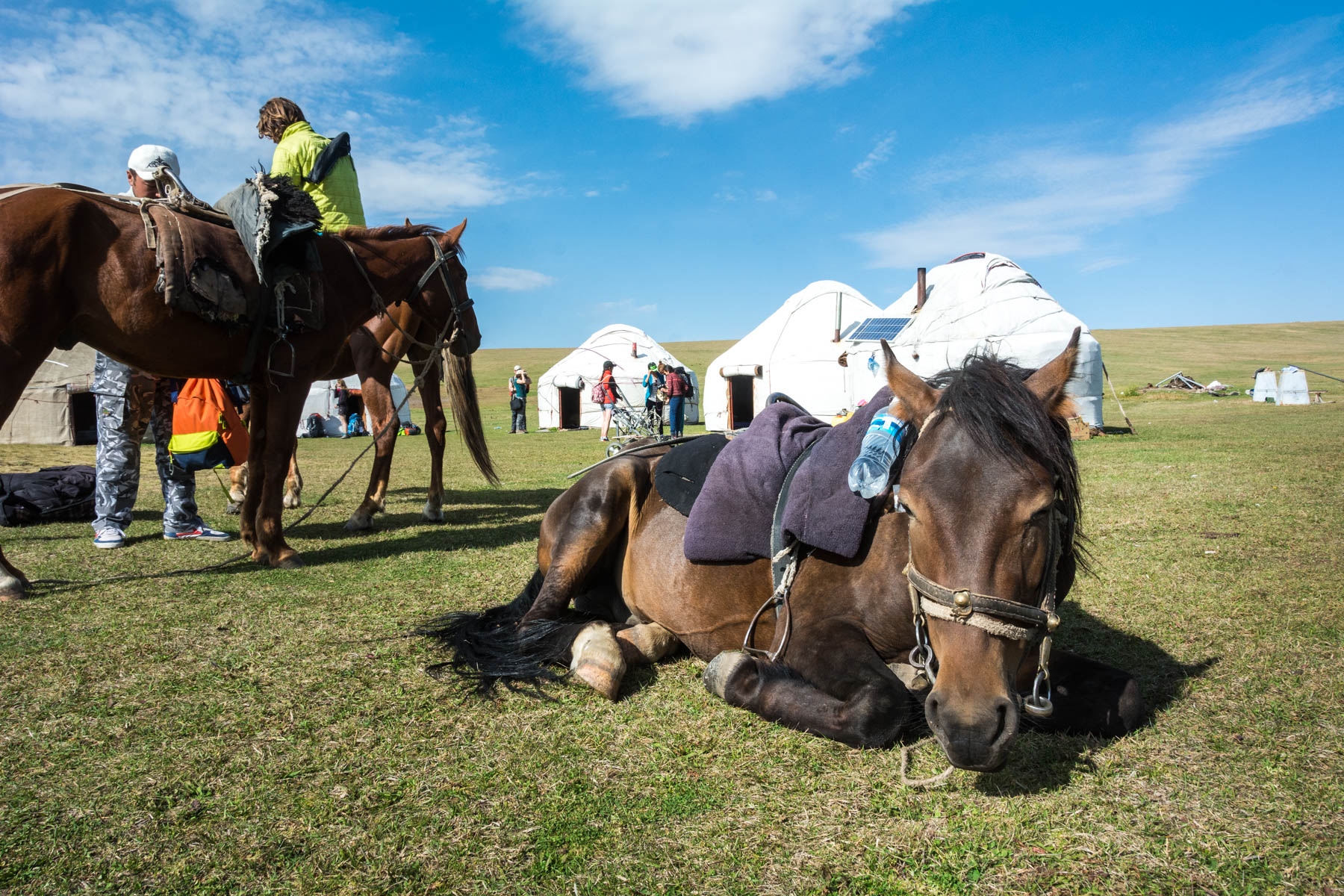 We lope along the lake and ride through the jailoos, alpine pastures. Our journey is punctuated by stops at yurts to curdle our bellies with kyzmyz, fermented horse milk, the Kyrgyz nomad’s drink of choice. 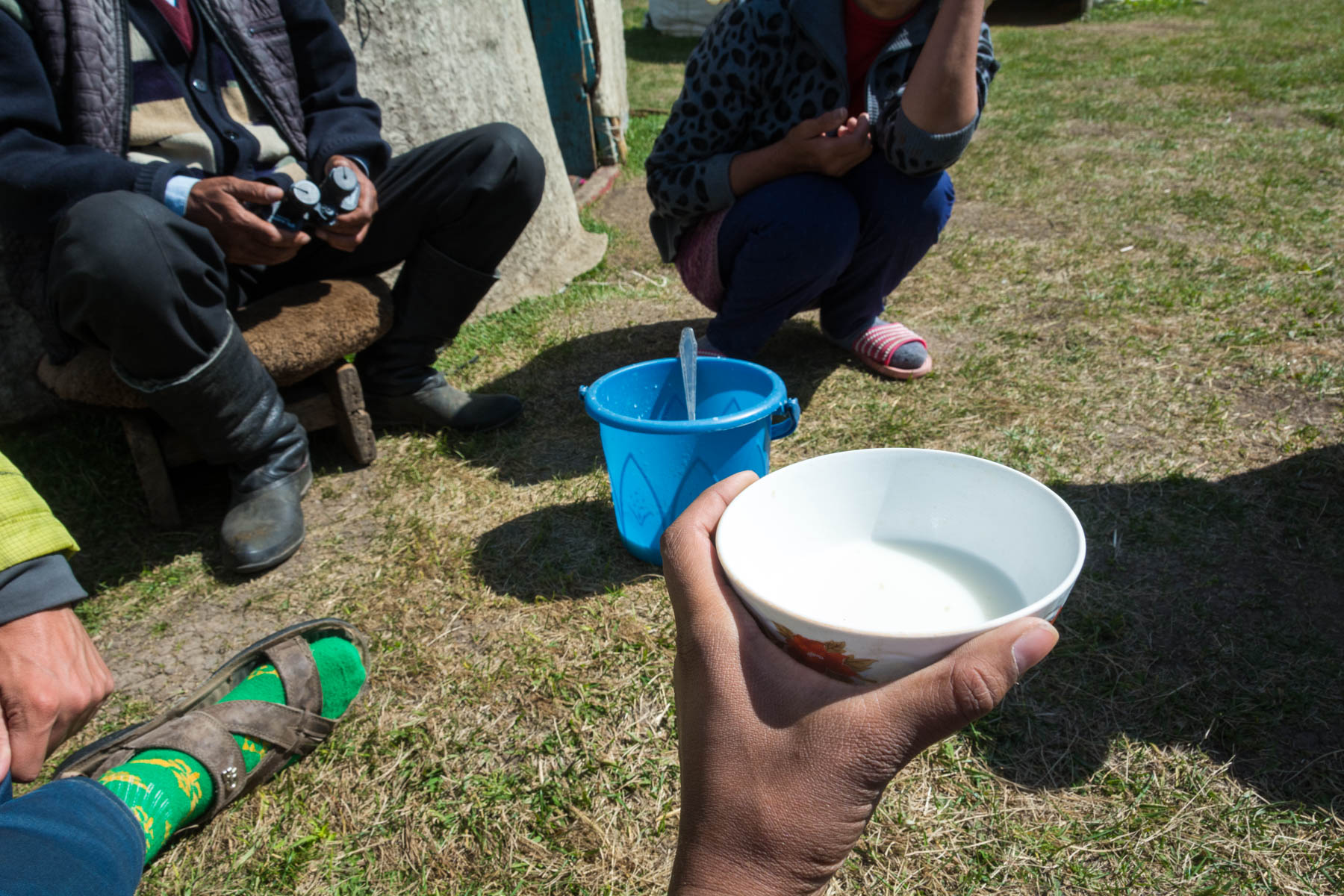 Alcoholic sour milk and bumpy riding make for a great combination, by the way. /sarcasm

As the horse plods on, I while away the hours explaining to him the different ways I will to cook him when the trek is over, down to the spices I would use on his roasted flanks (cumin, coriander and some dried chilies).

In the afternoon, everything changes. In a moment of desperate creativity, I remove the lead rope from Sebastiaan’s horse and tie it to my horse’s bridle. A meter of rope hangs from my hand, dangling against the horse’s side, not unlike the whips that the men use on their horses.

It feels like that moment when Harry Potter finally finds his first wand. Magic is about to go down.

The horse’s ears are suddenly attentive and alert. Gone is his give-no-fucks attitude–he is watching, waiting to see what I do next. With a few circular swings and a tap of the rope on his withers, we are, to my amazement, trotting.

For the first time in this trek, riding is actually fun. When I want to walk, the horse walks. When it’s time to trot, with a twirl of the rope, he starts to move. I’m finally riding neck and neck with my companions, rather than trailing a kilometer behind.

An exciting moment: seeing a part of the horse that is NOT its bum.

We crest a hill and come onto a flat, grassy plateau. It’s all too perfect: the sun is just breaking through the clouds, and the grass is catching the sun’s rays just so. There are no people, no animals, no rocks or trees or streams blocking our path. It’s just us, the horses, and the wide open world. 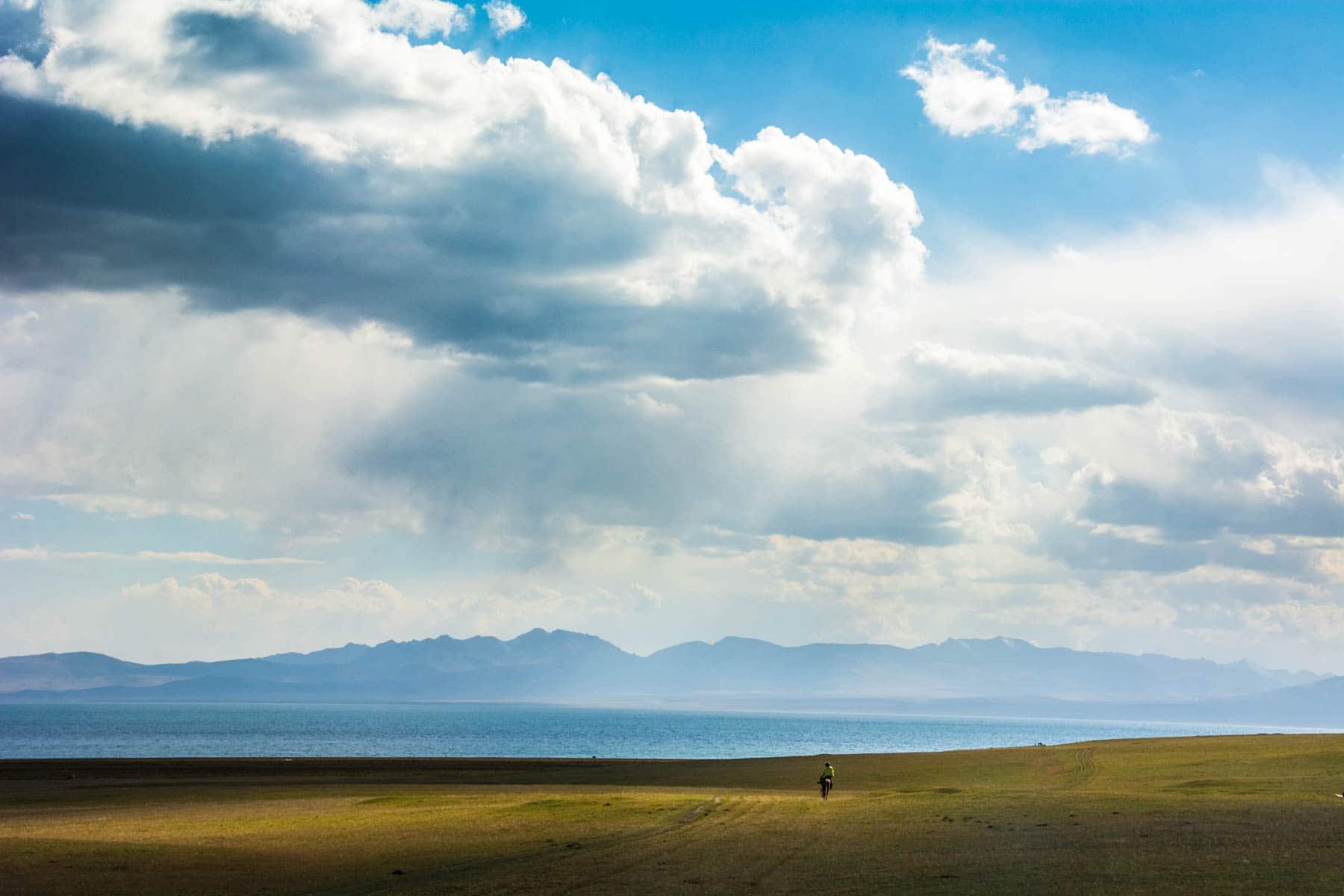 What more could you need?

I bring the horse to a speedy trot. Rope in hand, I flick it back and forth over his sides, and attempt my best Kyrgyz mancry. “Chuu! Chuu damn you!”

Hooves thunder beneath me, and rushing winds whip my hair around my face. I stand in my stirrups, laughing in exhilaration and relief, while the horse stretches his neck out to gallop faster. For once, we’re working together, not fighting. For once, we’re both enjoying ourselves. We gallop across the plain, racing forward until we’re finally forced to stop and catch our breaths. This is what I imagined when I pictured horse trekking in Kyrgyzstan. 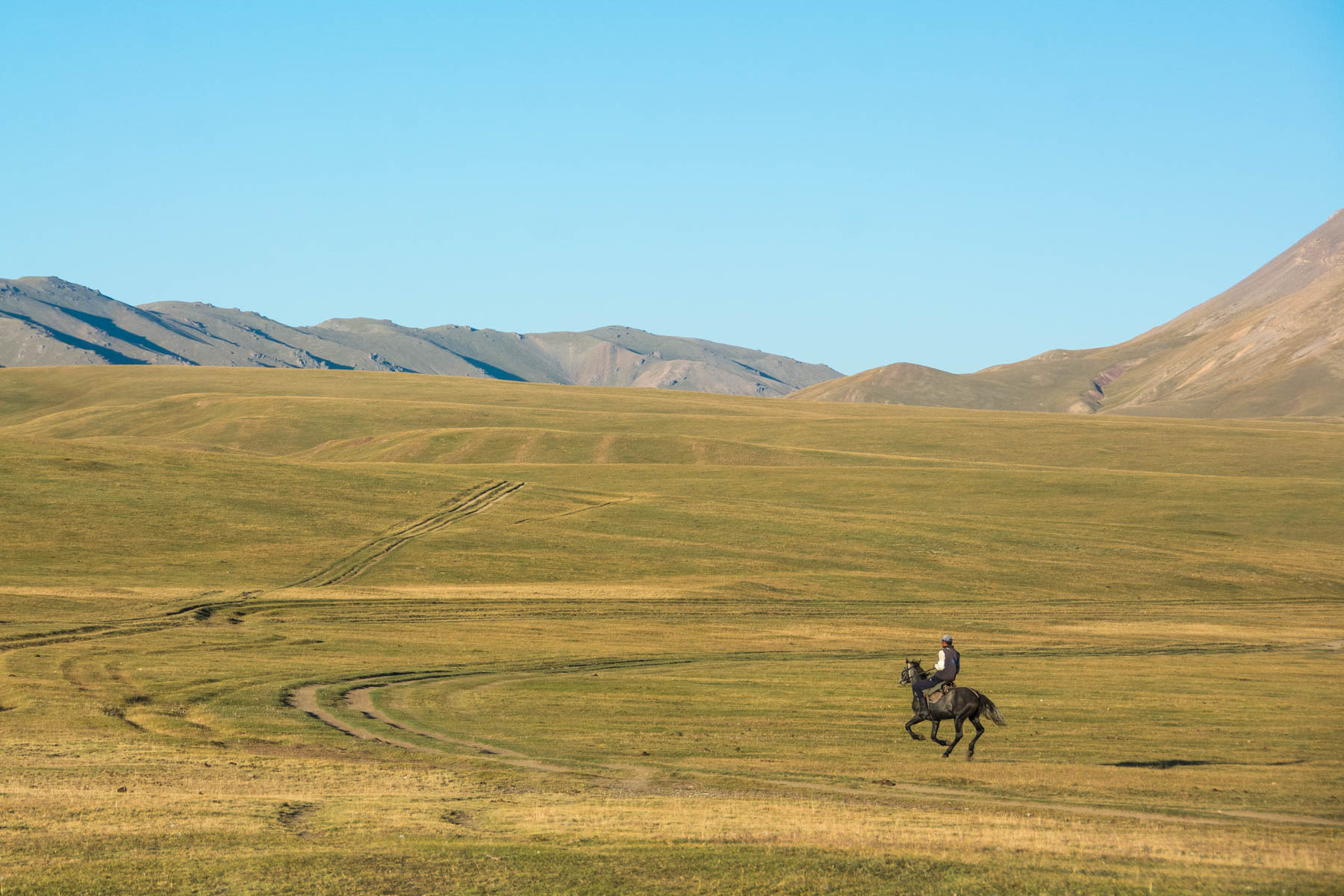 As the day winds down, we alternate between walking and galloping back to camp. With each interlude between gallops, my mind muses.

Kyrgyzstan is a land of nomads, a land of horsemen. People have been taming and riding horses here for at least 2,000 years, and it is said that Kyrgyz people can ride before they can walk.

I, on the other hand, have only ridden horses extensively in America, usually within the confines of a ring, according to strict Western riding etiquette. Refusing to use a whip was applying Western expectations to a Kyrgyz horse. Who was I to think that was the “right” way, that my way was better than methods deeply ingrained in Kyrgyz culture for thousands of years? 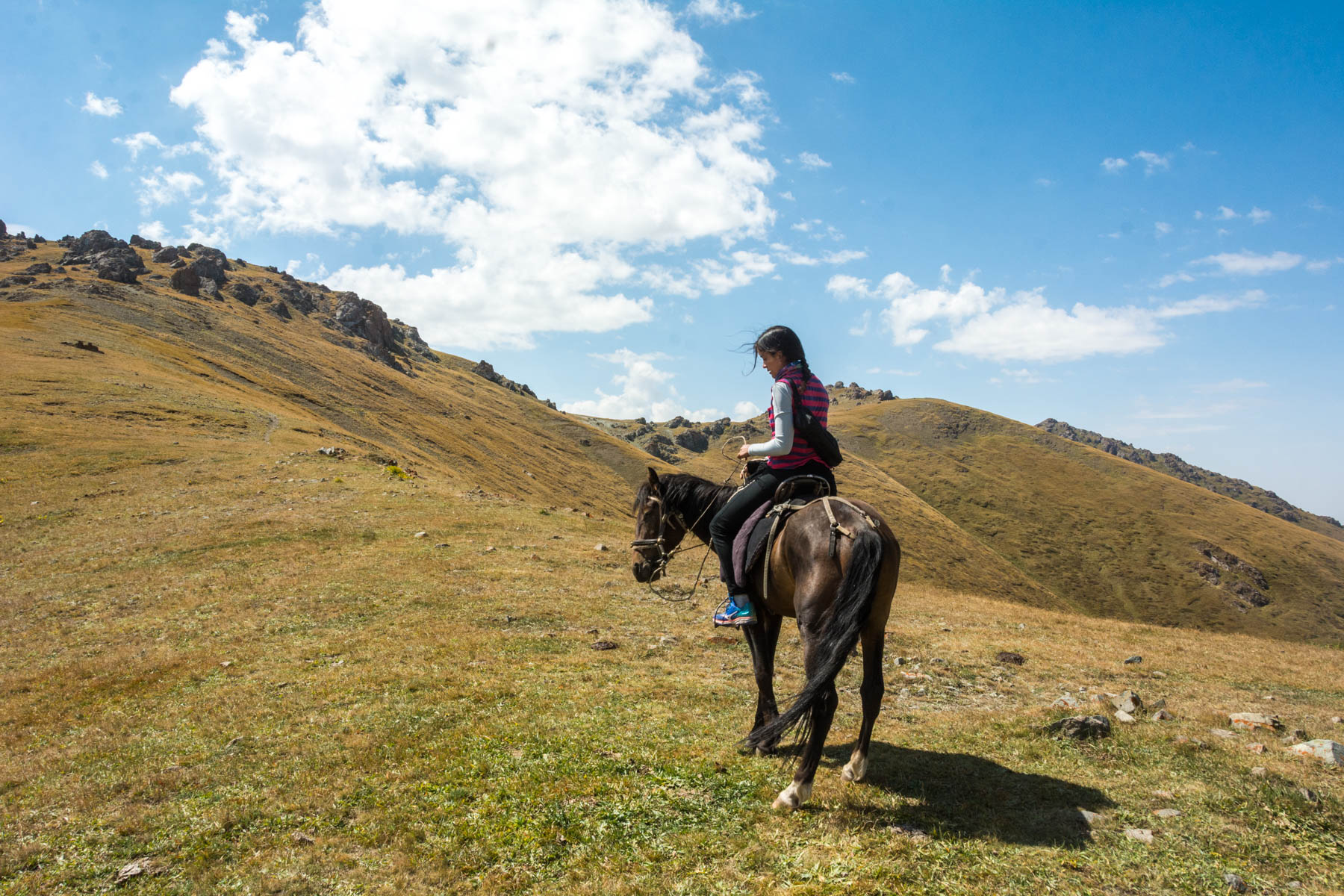 It’s something that we Western travelers do much more often than we realize. Countries are viewed through our Western lens, and we judge people’s lives and cultures based on our standards, rather than their own. We like to tell others how they should want to dress, the way women should act, the way families should be raised. We think of ourselves as saviors, forgetting that the people we’re scrutinizing have survived this long on their own. I can cite my English riding history all I want—that doesn’t mean it works the same out here in the wild Kyrgyz steppe. 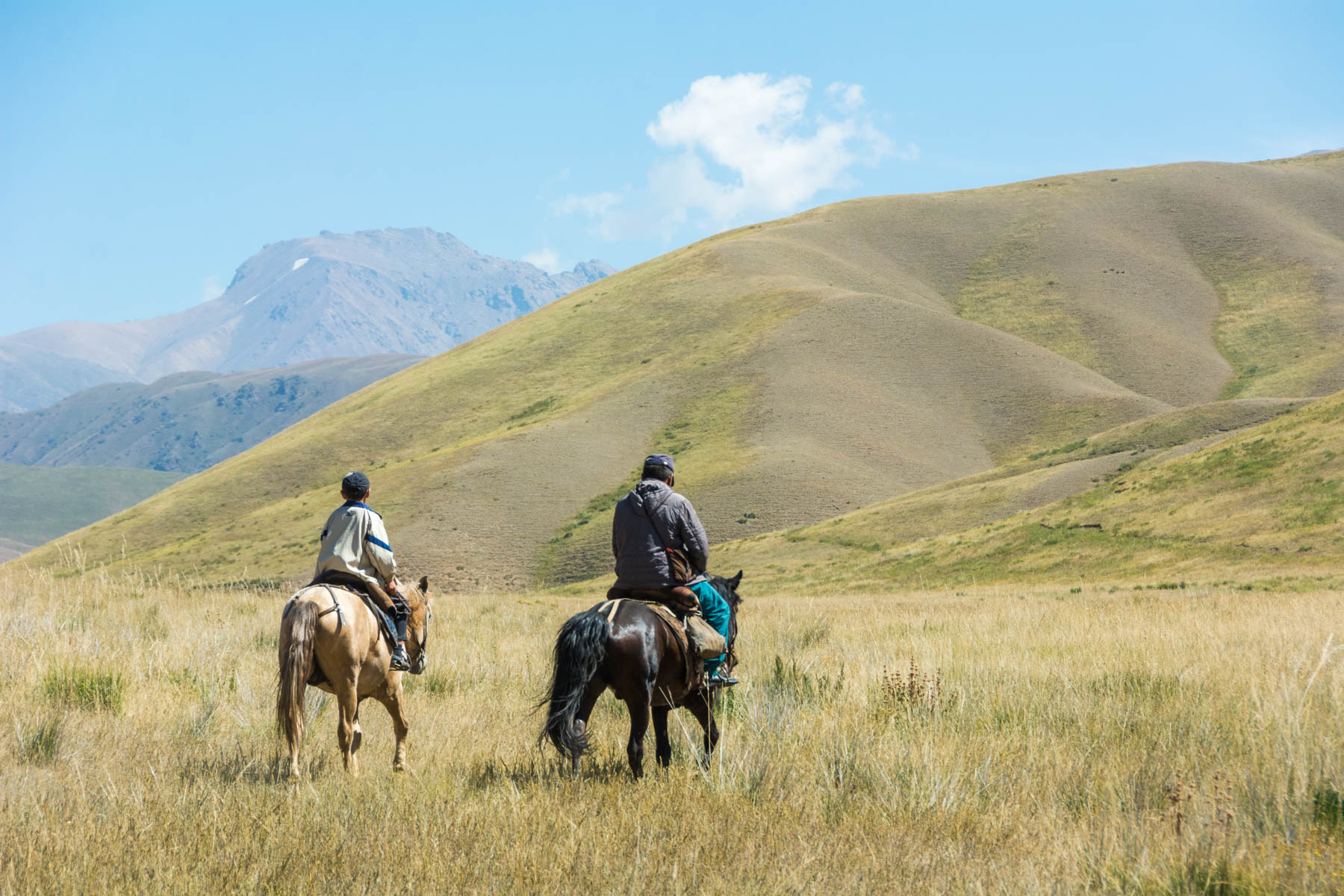 Upon our return, before releasing the horse to graze, I rub him on the neck.

“Just so you know, I kind of like you. And I promise I won’t cook you in a stew.”

For once, he doesn’t snort back at me. He sighs contentedly, enjoying the attention for a moment before moving on to graze in the evening light.

Head to either Kochkor or Kyzart, Kyrgyzstan. Marshrutkas from Bishkek to Chaek pass by Kyzart—just tell the driver where you’re going so he knows where to drop you off. The drop-off point is at a gate about half a kilometer from the town. Walk down the road and into town, then ask people where you can find horses. Bring a picture of a horse, or say “loshadi”, horse in Russian. 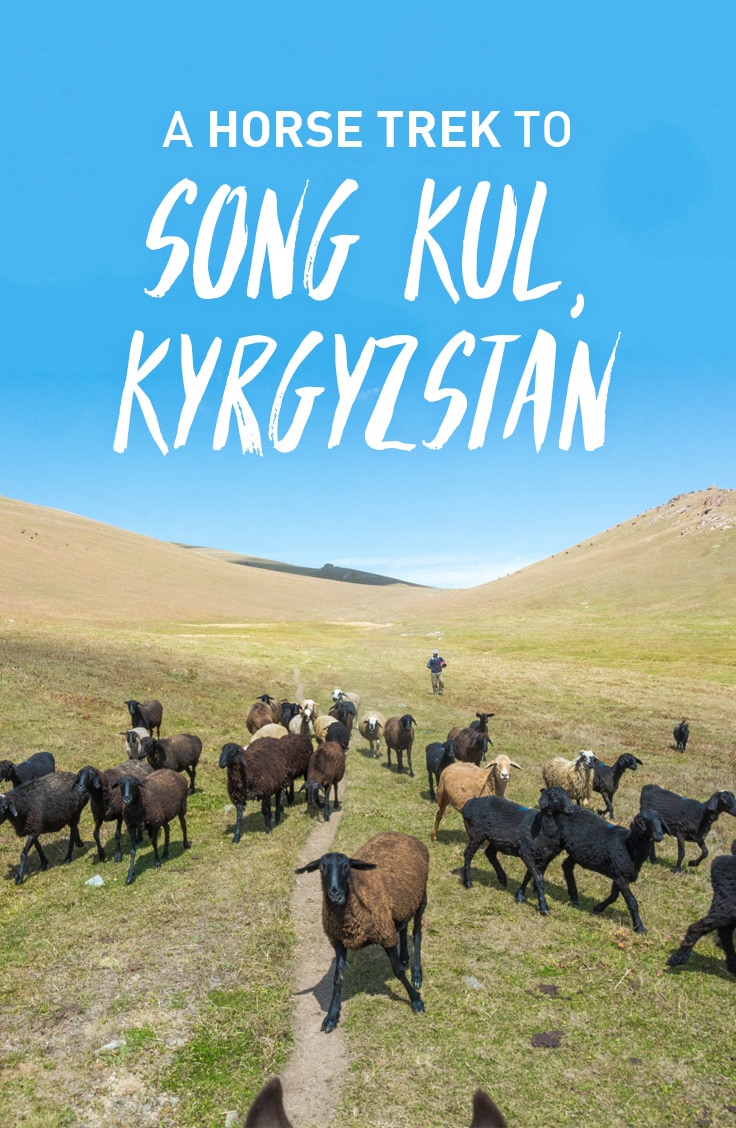